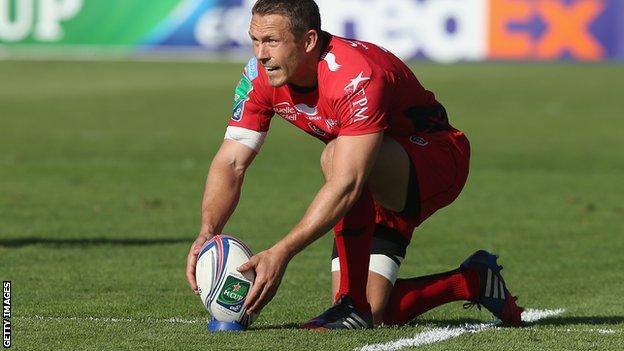 Jonny Wilkinson is determined to ensure a "happy ending" to his final game in Britain by leading Toulon to Heineken Cup success in Saturday's final against Saracens at the Millennium Stadium.

Wilkinson, 34, announced his retirement earlier this week, bringing an end to a career that has spanned 17 years.

How to win the Heineken Cup

"I made the pass that sent Jon Callard over to score our try as we beat Brive in the 1998 final. It was a massive decision for me because I'm pretty sure I could have made the line, but it was far simpler for me to pass it to JC to walk it in.

"It was such a vital score and I couldn't have lived with the humiliation if I hadn't made it. It's the only pass I ever made that I remember in slow motion.

"The thought of leaving the final without a happy ending to this journey is a painful one," said the fly-half.

"We've got to do everything we can to make sure it doesn't end like that."

Wilkinson, who earned 91 caps for England, will play one more game after the Heineken Cup final, next week's French Top 14 final against Castres in Paris.

He famously kicked the drop goal that won England the World Cup in 2003 and Toulon coach Bernard Laporte praised a "once in a generation" player.

"He is exceptional - you could talk about him forever," he added.

"Once, after France lost against England at Twickenham, I said we have Zinedine Zidane, and they have Wilkinson. I was right.

"It is a pleasure to have him. He is a perfectionist, but he is always asking questions as if he is starting out in the game."

Trying to prevent Wilkinson from enjoying a fairytale ending on Saturday is Owen Farrell.

The England fly-half makes his first appearance in a European final when he lines up for Saracens against Wilkinson's Toulon.

Farrell, though, is full of admiration for his fellow number 10, saying: "He is one of the very few players who have come into the game and set his own standards.

"He has not lived by anybody else's expectations, he has set his own.

"When that type of player comes along, it's pretty special. Obviously, everybody knows how special it is because of the career he has had."