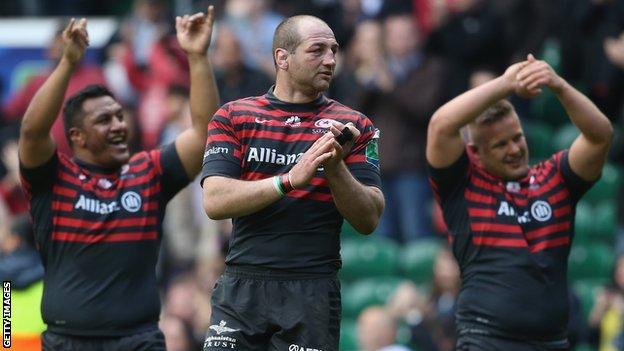 Due to travel to Cardiff to pose for photos and answer questions at a Heineken Cup press launch, Saracens told him he had to be at an "important squad meeting" in Munich the same day.

He complied. Perhaps unsurprisingly considering the "important squad meeting" was a day-trip to the city's Oktoberfest beer festival.

With the skipper alongside them, the first-team squad made so merry that one of their number failed to make the midnight flight home.

European rugby officials were not amused, however. They fined Saracens £4,250 for instructing Borthwick to snub Heineken Cup matters for the business of sinking steins.

We're trying to be a little bit different, which will always raise eyebrows. Maybe others should look at what we're doing

Saracens chief executive Edward Griffiths was unapologetic, and Bavaria drinking music pumped out of the speakers before the team's win over Leicester the following weekend.

"We're trying to be a little bit different, which will always raise eyebrows," he said. "Maybe others should look at what we're doing."

This was the autumn of 2010 and Griffiths had been in his job a little over 18 months, having arrived, along with South African director of rugby Brendan Venter, in a series of sweeping changes.

The suggestion that Saracens should be the template for others did not seem justified by the north London's club history.

True, they had been denied their first Premiership title the previous season only by a dramatic late Dan Hipkiss try. But for many years Sarries had been a middling club, rarely competitive when the going got tough and rarely threatening to win anything.

Eight months after the Oktoberfest jaunt, they won their first Premiership title.

Three years further on and they were within two games of a Heineken Cup and Premiership double, facing Toulon and Northampton on successive Saturdays.

Defeat by the French side on Saturday denied them the first of those, but success in the second remains within their grasp.

Before taking up his role with Saracens, Edward Griffiths was chief executive of the South African Rugby Union. He has been credited with ensuring that the 1995 World Cup-winning Springboks side learned all the verses of the new national anthem, Nkosi Sikelel' iAfrika, and coming up with the slogan 'one team, one country'.

The 'cult of Saracens' - as some have dubbed their way of doing things - is certainly taken seriously now with Griffiths as its charismatic, unorthodox high priest.

While most sports administrators are usually caught between the demands of the balance sheet and the score sheet, he describes himself as merely "interested" in the outcome of both finals. And even that sounds like a stretch.

"Too much of sport operates under the tyranny of the result," Griffiths tells BBC Sport.

"The core principle at Saracens is that we gather talented people together, treat them unbelievably well and in return they try unbelievable hard. That is it.

"We exist to have a positive impact on as many people as possible."

It sounds like the philosophy of a smoothie company or perhaps an idealistic Silicon Valley start-up - not the hard-nosed, shape-up-or-ship-out approach of most high-level sport.

But it works and Saracens pay much more than lip service to the concept of treating their staff "unbelievably well".

Their regular foreign jaunts are an obvious part of the process.

Since 2010 the players have sunned themselves in the Italian resort of Rimini, hung out in Miami, hit the ski slopes in Switzerland and returned to Munich for a longer stay at Oktoberfest - all while their rivals are slogging it out on the training field.

One trip involved the players separating into groups to make their way from their Hertfordshire base to a rendezvous in Barcelona by whatever means they chose. On another, they climbed Cape Town's Table Mountain together.

This year they went to New York, taking in an ice hockey match at Madison Square Gardens.

While the destinations are exotic, what goes on upon arrival is old-fashioned: no team-building larks, no trust exercises, no flipcharts. Instead, lots of eating, drinking and laughing.

"Other clubs look at these trips and think they are stag parties," says Griffiths.

"It is far from that. It is a carefully-planned process to develop a group of people who will do whatever is necessary for each other and ultimately love each other."

Chris Ashton is a recent convert. The England winger, who arrived at Saracens via rugby league side Wigan and Premiership rivals Northampton, says the atmosphere is unlike any other dressing room he has been part of.

"When you are at a rugby club every day, you come in, do your work, train and go home to your families," he says. "You don't really get to spend that much quality time as a group together.

"Those trips give everyone the opportunity just to get to know everyone a little bit better, and spend quality time together."

Saracens' interpretation of quality time is different from what Ashton had experienced before. It is not just a question of banter. In fact, it isn't really banter at all.

A natural extrovert, Ashton had a reputation at Northampton - and still has one with England - for being one of the loudest members of the dressing room.

At Saracens, however, humility is prized as one of the club's four key values and Ashton has reined in his boisterous, bantering instincts.

"When I was at Northampton I was in the middle of it, giving all the abuse out, but that is not a big part of what goes on here," he tells BBC Sport.

"It's a bit hard to explain, but the environment is different and how the group want to be treated is different."

Within the Saracens staff there are 29 undergraduate degrees, 11 Masters degrees, one doctorate, two doctors and a professor. Brad Barritt (above) is soon to complete a Masters in business administration.

The globe-trotting mini-breaks are only the most eye-catching part of an approach that is designed to care for people as well as players.

The club require all their players to develop themselves off the pitch - through studying, work experience or running their own business - to prepare for life after rugby.

So centre Brad Barritt is about to complete a Masters in business administration, full-back Alex Goode has donned a shirt and tie to see how the insurance industry works and prop James Johnston's fledgling pie company is open for business at half-time at Allianz Park.

Every month on a Tuesday lunchtime, a speaker - after an introduction by a nervous young academy player - talks to the club as a whole.

There are workshops to learn negotiating and networking skills, charity partnerships and social events for players' partners and creches and personalised Christmas gifts for their children.

Paul Gustard was a player at the club before the arrival of Griffiths and Venter and has remained as defence coach.

"To a man, we have changed as people. Not only have we become a better rugby side, but we have become better people," he says.

"Nobody really comes to Saracens and leaves two years later like they did in the old days. They come here, play their career, retire and move on with a job we've helped them get.

"If you can have something that is over and above being a team-mate and be a genuine friend that I can ring up in 10 years' time, that is what I think Saracens is about."

The inevitable internal competition among a stellar squad could derail all these good intentions.

But each player is subjected to four separate psychological profiles. The results are shared with coaches and senior players, so instructions and advice can be delivered in the most constructive way possible.

Before taking up residence at their purpose-built Allianz Park home in 2012, Saracens had lead a nomadic existence, playing out of various London venues:

Nobody is ever "dropped", they are "rotated".

It may sound like semantics, but scrum-half Richard Wigglesworth won his starting place in Saracens' last Premiership final appearance only on a coin toss, with Neil de Kock replacing him in the 50th minute regardless of the state of the game.

Reducing results to a secondary concern and caring for, as well as paying, players requires healthy finances and a solid grounding towards the top of the Premiership table.

But Saracens have been well-backed before. Former owner Nigel Wray, who remains chairman of the club, brought in World Cup winners Francois Pienaar and Michael Lynagh and French stars Thomas Castaignede and Thierry Lacroix on big contracts.

The 1998 Tetley's Bitter Cup was the only silverware to follow.

Now Saracens are regular challengers for silverware, Griffiths and his staff are aware how their approach may come across.

"The Saracens way is our way and it suits us, but we are not pious and preaching about it in any way at all," says Griffiths.

"I would never tell Leicester, Harlequins or Northampton how to run their clubs."

He doesn't need to. Players and coaches at all three clubs cannot fail to have been impressed by Saracens' record-breaking 46-6 Heineken Cup semi-final win over Clermont Auvergne.

Griffiths says: "The dividing line between success and failure in professional sport is incredibly thin; it is literally a matter of inches.

"If you get to know someone well - their wife, their children, what excites them, what concerns them - when you are defending your line in the last minute the bond between you and the man outside you is going to be stronger.

"If we can find an extra inch in that bond, in the depth that players are prepared to go for each other, in Miami, New York or anywhere else, that is where we will go."