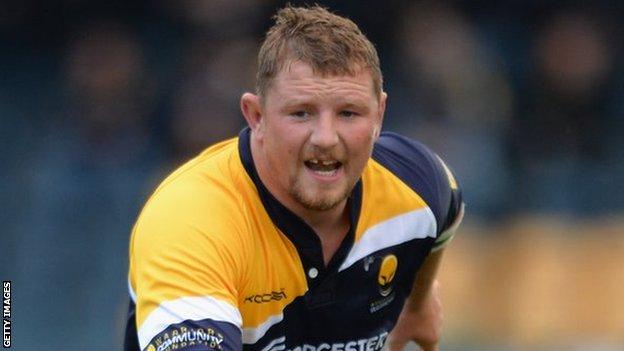 The 30-year-old Ireland A tight-head was previously with Exeter and Harlequins.

Edinburgh coach Alan Solomons said: "John is well known to me from my time in Ulster when he was a young boy playing under-20 rugby.

"He is an outstanding scrummager but is also good around the field. I think he will bring a lot to this club. We need depth in that tight-head position."

Andress spent two years with Worcester in England's top flight but was released along with Scotland forward Euan Murray after both suffered an injury-hit end to the season.

"He came through the age-grades in Ireland and then, in my opinion, did the right thing in signing for Exeter, who were playing in the Championship," said the coach.

"After a couple of successful years there, he joined Harlequins and Worcester in the Premiership, which means he comes to us with a lot of tight-head experience earned in the two very competitive divisions."

Andress was excited about the prospect of teaming up with the South African again at "a fantastic rugby club in a great city".

"I know how good a coach Alan Solomons is and what he brings to the table, so I'm delighted to get a chance to work under his guidance again," said the prop.

"He feels that the club has a good infrastructure in place and is now looking to build on it.

"He wants to make the club's academy system even stronger and build a really good first team for the youngsters to be exposed to, learn from, and grow into first-class players, in order to build a club structure that will become self-reliant.

"I've earned a lot of experience in two very tough scrummaging leagues and I'm keen to be part of this vision to build a successful club and work with the younger guys and help them develop."