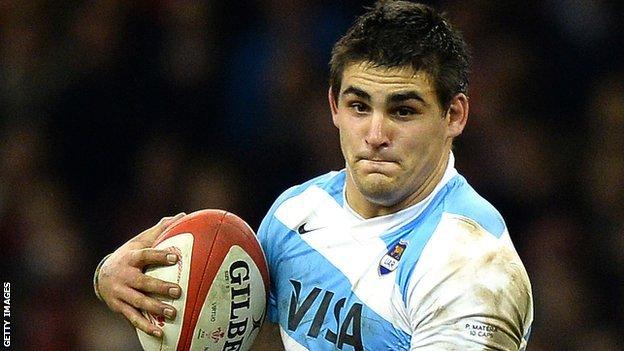 Director of rugby Richard Cockerill has said Leicester Tigers need to find a way of retaining flanker Pablo Matera that suits both club and player.

The 20-year-old is out of contract at Welford Road this summer but has joined up with the Argentina national team for the Rugby Championship series.

"We're in the middle of negotiations to try to make that work," Cockerill told BBC Radio Leicester.

"It's a complicated situation. We're doing our damndest to keep him here.

"How that works with Argentina and the southern hemisphere Super 18 competition we'll have to see."

Pablo Matera has made 11 appearances for Argentina, and scored a try on his debut against Chile in May 2013.

He played all three of the Pumas' Autumn Tests in 2013 against England, Wales and Italy.

Cockerill brought the sought-after Matera to the Tigers in October 2013 as cover for the injured Tom Croft - five months after his Pumas international debut.

Leicester have profited from Argentine imports in recent years in the shape of Lucas Gonzalez Amorosino, Marcos Ayerza and Gonzalo Camacho.

However, unlike the Australian and New Zealand rugby unions, Argentina select players based outside of their domestic league, placing extra pressure on the availability to their clubs during the Rugby Championship and Autumn Test fixtures.

"Our contracts start 1 July, so you're talking four or five months of full salary before we get to see the player," Cockerill continued.

"That's not the players fault, that's just the circumstances we're in. We have to be delicate around that and make sure you have enough coverage.

"When they come back from Argentina they are in different fitness scales - they've played some tough rugby."

Tigers have already made five new additions to their squad for 2014-15, with Gloucester and England fly-half Freddie Burns among the stand-out names.

Ed Slater, who captained the club during the final weeks of the Premiership season, has agreed a new deal - as have Lewis Deacon and Anthony Allen.