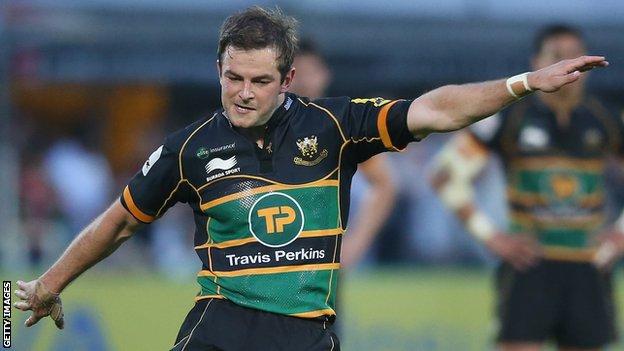 Northampton Saints fly-half Stephen Myler has said victory over Bath in the Amlin Challenge Cup final on Friday would give the season substance.

"We all work and graft throughout the year for opportunities like this," Myler told BBC Radio Northampton.

"When you don't win a trophy it can feel like it's not been worthwhile. One piece of silverware can signify if you've been successful or not."

He added: "It's a funny feeling. But it would be just rewards for our efforts."

Northampton have not won a trophy since lifting the LV= Cup in 2010, a year after their first and only Challenge Cup success.

The past four years have been a series of near misses for the Franklin's Gardens side, finishing runners-up in the Heineken Cup in 2011, the Premiership in 2013 and the LV= Cup in 2012 and this season.

"It's been a number of years now that we've been so close," said 29-year-old England international Myler.

"We've put ourselves into position and not quite got over the final hurdle.

"But we've been steadily improving, our squad is a lot stronger and we've given ourselves another opportunity."

Myler was part of the Saints side that won the Challenge Cup five years ago by beating Bourgoin at The Stoop.

Jim Mallinder's side could complete a European and Premiership double over the next nine days, should they beat Bath at Cardiff Arms Park and then Heineken Cup finalists Saracens a week later at Twickenham.

"You get a limited number of opportunities to win a major trophy for a club," said Myler.

"I'm certainly not thinking about the Premiership final yet. It's looming the week after but the team's efforts are on this week.

"We've won this trophy before. I look back and it's one of the best nights of my career so far."