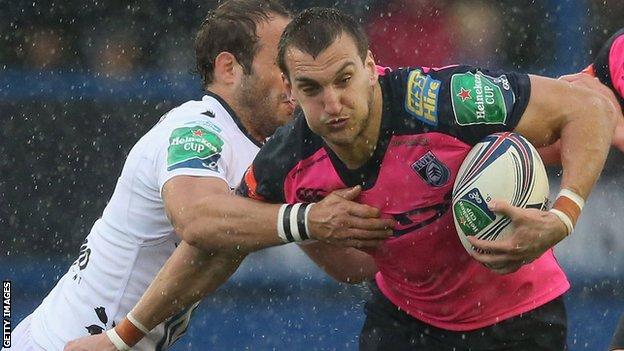 Wales captain Sam Warburton says he is "privileged" to be the only current centrally-contracted player in Welsh rugby, and expects others to follow.

The 25-year-old signed a Welsh Rugby Union contract in January and plans to play on with the Blues next season.

"I think more players will come on central contracts, that will definitely happen in the next few years," he said.

However, the regions - Blues, Scarlets, Ospreys and Dragons - are unwilling to field centrally contracted players.

All other top-flight players in Wales are contracted to the regions, with Warburton opting to sign a WRU deal after failing to agree a new contract with the Blues.

"I feel quite privileged to be the first one, really. It's a great compliment," added Warburton.

"For me the WRU might manage my game time, but other than that only the name on the payslip changes - I'll just continue as normal."

Flanker Warburton, the 2013 British and Irish Lions captain, was one of six high-profile players identified by the WRU as those they wanted to keep in Wales.

The union was prepared to offer players contracts if the regions were not able to secure the players' signatures.

Of the six, Warburton is so far the only one to agree a central deal.

Of the others Alun Wyn Jones (Ospreys), Rhys Priestland and Scott Williams (both Scarlets) have new regional contracts.

Central contracting is claimed to be a stumbling block delaying a new funding agreement between the regions and the WRU, according to Regional Rugby Wales' acting chief executive Mark Davies,

The regions are partly funded by the WRU in an agreement which guarantees a set level of income and covers the release of players for Wales international duties.

Other funding comes via participation in competitions.

The two parties are yet to reach an agreement on funding for the next five years, with the current deal ending on 30 June.

Warburton is halfway through a recovery plan after undergoing surgery on a shoulder and hopes to take part in a full pre-season with the Blues.

"From the second I put pen to paper on my central contract I've just carried on as normal," he said.

"I've had my email saying when I'm going to be back in pre-season.

"I've got my head around that already and I'm just going to carry on as normal with the Cardiff Blues which is what I always wanted."