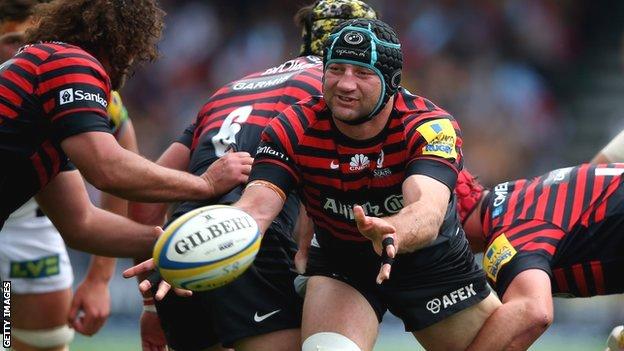 Steve Borthwick will be fit to captain Saracens against Toulon in Cardiff on Saturday as the Londoners bid to win their first Heineken Cup in the tournament's last final.

Jonny Wilkinson, 34, will lead Toulon, with both ex-England captains playing the penultimate games of their careers.

Toulon make one change to the XV that beat Munster in the last four as lock Bakkies Botha replaces Jocelino Suta.

"The Saracens players have sunned themselves in the Italian resort of Rimini, hung out in Miami, hit the ski slopes in Switzerland and returned to Munich for a second stay at Oktoberfest - all while their rivals are slogging it out on the training field.

"One trip involved the players making their way to in Barcelona by whatever means they choose. On another, they climbed Cape Town's Table Mountain together.

"This year they went to New York, taking in an ice hockey match at Madison Square Gardens."

Saracens second row Borthwick, 34, was taken off in Saturday's Premiership play-off victory over Harlequins with a chest injury and had been rated "50-50" for the match.

After 19 years as Europe's premier club competition the Heineken Cup is coming to an end, with the European Rugby Champions Cup replacing it next season.

Saracens are bidding to follow in the footsteps of Bath, Northampton, Leicester and Wasps and become the fifth English winners, while Toulon are aiming to become just the third team to win the title two years in a row after Leicester (2001 and 2002) and Leinster (2011 and 2012).

Toulon beat Saracens in the semi-finals last year but the Londoners' boss, Mark McCall, believes they are a better side than they were 12 months ago.

"We've changed and evolved," he insisted.

"We made a lot of mistakes in our half against them last year. Six of their penalties came from when we were in possession of the ball and we have to be better than that.

How to win the Heineken Cup

"I made the pass that sent Jon Callard over to score our try as we beat Brive in the 1998 final. It was a massive decision for me because I'm pretty sure I could have made the line, but it was far simpler for me to pass it to JC to walk it in.

"It was such a vital score and I couldn't have lived with the humiliation if I hadn't made it. It's the only pass I ever made that I remember in slow motion.

"Since then, we've changed the way we play a little bit, especially attacking-wise, and I think we've become more mature and confident in what we do," he added.

Saracens are the leading try scorers in the tournament this season with 37 - winger Chris Ashton has already set a new individual record of 11 - but it is their 'Wolf Pack' defence that underpins their game-plan.

"It's called the 'Wolf Pack' because wolves hunt better in packs," Farrell explained.

Sarries are also in next weekend's Premiership final, while Toulon's Wilkinson will be hoping to sign off from a stellar career with victory in the French Top 14 final against Castres.