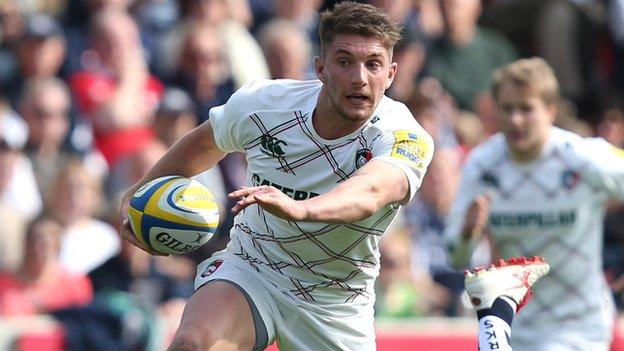 Leicester fly-half Owen Williams has been banned for six weeks, ruling him out of contention for Wales' June tour to South Africa.

Williams has been found guilty of making illegal contact with the eyes of Northampton's Luther Burrell in the Aviva Premiership play-offs.

The International Rugby Board recommends bans of between 12 and 156 weeks for players guilty of such offences.

The Wales tour starts with a warm-up against Eastern Province Kings in Port Elizabeth on Tuesday, 10 June. They face the Springboks in Durban on Saturday, 14 June and again in Nelspruit a week later.

Before that, there is a Wales Probables v Possibles trial on Friday, 30 May in Swansea.

Williams was among the England-based Welsh contingent who were denied the chance to be named among the trialists by the English Premiership clubs' governing body, Premier Rugby Limited (PRL).

But after an impressive first season for Tigers, Williams remained in the running for a Wales tour place.

Incumbent Wales fly-half Dan Biggar lines up for the Probables against former Ospreys team-mate James Hook, who plays for the Possibles at Liberty Stadium.

But Henson is among those ruled out of the Wales trial by the PRL stance.

The RFU hearing in Bristol comprised of Sir James Dingemans and John Doubleday.

Williams was cited following a fiery Premiership semi-final between Northampton Saints and Leicester.

Tigers fly-half Williams was charged with "acts contrary to good sportsmanship/making contact with the eye(s) or eye area of Luther Burrell".

Leicester will be without Williams for three pre-2014-15 season games.

That could give new rival Freddie Burns the chance to stake an early claim to the Welford Road pivot role.