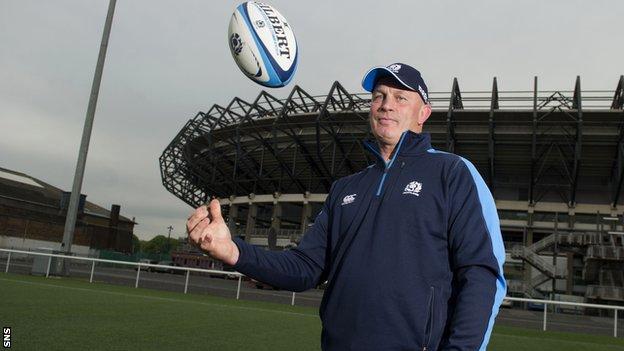 Fellow Warriors forwards Gordon Reid, Alex Allan and Kevin Bryce are in the 43-man party for the summer tour.

Cotter was named last year as the replacement for Scott Johnson, who has become director of rugby, but had to complete his contract with French Top 14 club Clermont Auvergne. before taking charge.

The New Zealander's first Scotland selection is split into two squads, one for the matches against USA and Canada and the second for the games in the southern hemisphere.

Cotter said: "I'm very much looking forward to starting work with the Scotland players as we begin our 16-match countdown to the 2015 Rugby World Cup in England.

"Working with Scott Johnson and the national coaches, we've selected, effectively, two squads for our itinerary this summer taking into account Glasgow Warriors' pursuit of Pro12 silverware and the fact that our match against South Africa falls outwith the IRB Regulation 9 window."

The second squad is therefore more heavily weighted towards players from Glasgow and Edinburgh, which are directly under control of Scottish Rugby, as clubs elsewhere are not duty-bound to release players for that final match of the tour.

"We've included a mix of the battle-hardened and promising new talent and it will be good to see how players step up to tough and different challenges at the end of a long domestic campaign," added Cotter.

Hooker Bryce is a particularly surprise choice after having only made two substitutes appearances previously in professional rugby.

Edinburgh duo Jack Cuthbert and Matt Scott, Glasgow forward Ryan Wilson and Bristol flanker Ross Rennie would have been included for the tour but for injury.

Meanwhile, other unnamed players were left out because they have chosen to undergo surgery, according to the SRU.

Some absentees are the result of their likely involvement in the sevens competition at the 2014 Commonwealth Games in Glasgow in July, with Scotland due to name their squad on Wednesday.

Both Nick De Luca and Richie Vernon, who were called up for the recent Glasgow Sevens, are absent from the tour squad.

Glasgow forward Ryan Grant and Edinburgh pair Matt Scott and Greig Tonks all miss out despite featuring in the Six Nations squad earlier this year.

Kellock was not available for that competition with an arm injury and has returned to lead Glasgow to the Pro12 final, but there is no place in the tour squad for the 32-year-old who has 56 caps.

Another notable absentee is 33-year-old, 59-times capped prop Euan Murray, who was recently released by Worcester.

Cotter will consider the captaincy when preparations begin for the North American leg of the tour next week.

Scotland begin the summer campaign against the USA in Houston on 7 June.

They will then attempt to make it three Test wins out of four against Canada when the nations meet seven days later in Toronto.

The Scots fly south to Cordoba for a match on 20 June, looking to make it four wins on the trot in Argentina.

Their final game is in South Africa against the world's second-highest ranked team, the Springboks, in the Nelson Mandela Bay Stadium in Port Elizabeth on 28 June.