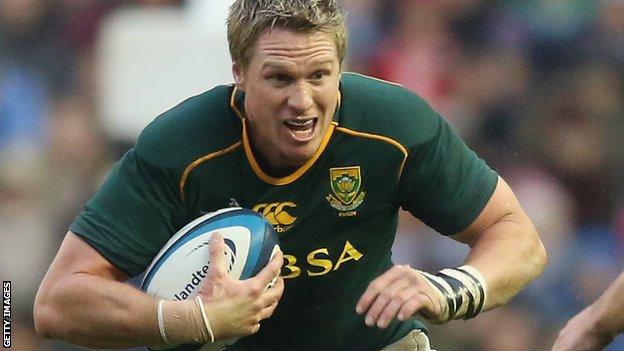 South Africa will be without captain Jean de Villiers for the June Tests against Wales and Scotland.

The Stormers centre has been ruled out for up to eight weeks because of a left knee injury.

De Villiers will miss the 14 and 21 June clashes with Wales and the Test against Scotland on 28 June.

"Losing our captain is a massive setback, Jean has been superb as our leader on and off the field," said Springbok coach Heyneke Meyer.

"He was in excellent form as well. He is a wonderful ambassador for South Africa and is respected across the world as a leader - we will certainly miss him next month.

"His injury is the latest in a string of setbacks we've experienced, and with [centre] Jaque Fourie also ruled out it means we'll play with a new captain and a new midfield combination next month.

"Luckily we have good depth in the squad at centre, but replacing your captain is always difficult. We have a number of good leaders in the squad, but I don't want to rush a decision on the captaincy as we still have to finalise the squad for June."

With Meyer happy with his other centre options, De Villiers' place in the training squad is taken by promising Sharks lock Stephan Lewies.

Veteran lock Victor Matfield was also included in the 36-man training squad that assembled in Durban on Sunday.

Matfield, 37, who won the 2007 World Cup, retired after playing for the Springboks at the 2011 tournament but still plays club rugby for Bulls.

Flankers Heinrich Brussow and Schalk Burger, who also won their last caps at the 2011 World Cup, are in the squad.

Meyer did not consider any Europe-based players for the training camp in Durban from 25-28 May.

But Japan-based scrum-half Fourie du Preez is included in the 31-man squad.

Burger, 31, has suffered a series of injuries as well as contracting meningitis in 2013, but has made a successful comeback for Stormers.

Meyer said: "Victor and Schalk have been out of rugby for a long time.

"They've really been in great form recently and the fact that they have not been with the Boks for more than two years, has made them hungry for Test rugby yet again.

"It's great to welcome them back into the Springbok fold and I know both of them can still add a lot of value to the team with the Rugby World Cup in 2015 looming.

"I'm also looking forward to working with Heinrich for the first time."

Wales hold a Probables v Possibles trial on Friday, 30 May and will name their tour squad after it. South Africa name their squad a day later.

Wales play a warm-up game against Eastern Province Kings on 10 June before facing the Springboks in back-to-back Tests on 14 and 21 June.

Scotland's tour takes in Tests against USA Eagles on 7 June followed by clashes on successive weekends against Canada, Argentina and Springboks, the latter at Port Elizabeth on 28 June.