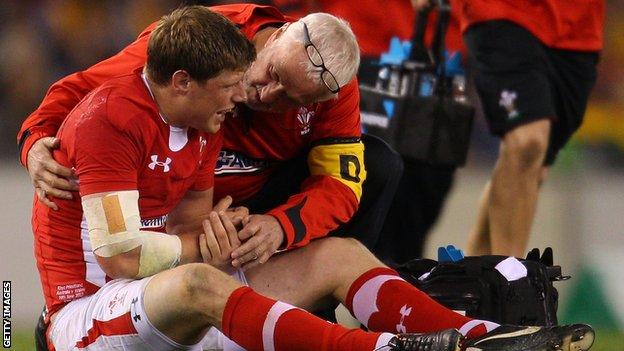 Welsh rugby legend Phil Bennett says Rhys Priestland's knee surgery will be a major set-back both for the Scarlets fly-half and for Wales.

The 27-year-old suffered the injury in his region's last game of the season in the 27-15 win against Cardiff Blues.

Priestland will miss Wales' tour to South Africa and Bennett says it is disappointing for the player.

"It's a huge blow for Rhys to suffer this injury after the Achilles injury he suffered a year or so ago," he said.

Priestland recovered and started Wales' Six Nations campaign as the first-choice number 10 but lost his place to Dan Biggar by the end of the tournament.

"He's fought very hard. He's trained very hard and I think he was the fittest he's ever been since he came back from that injury," said Bennett.

"He looked to be in good form. It's a big loss for Wales because we obviously know [Wales head coach] Warren Gatland likes Rhys Priestland the way he plays, the way he brings his backs into action and it's a big blow for Rhys himself."

Wales play the Springboks in Test matches on 14 June and 21 June, with a warm-up game against Eastern Province Kings on 10 June.

Priestland is expected to be out of action until August and is the 10th player to drop out of Wales' summer tour through injury.

Ospreys scrum-half Rhys Webb is also a doubt for Gatland's 31-man squad because of a knee problem.

Bennett played outside-half for Wales during the 1970s golden era and was a star of the Lions' invincible 1974 tour to South Africa.

He thinks James Hook or Owen Williams should be taken to replace Priestland but believes Biggar will be first choice on tour.

"He's [Biggar] improved attacking wise," said Bennett, "and the big thing with Dan Biggar is that we are going on that tour without Leigh Halfpenny, probably one of the top three world goal kickers.

"So we need a reliable goal-kicker and Dan Biggar is a superb goal-kicker."