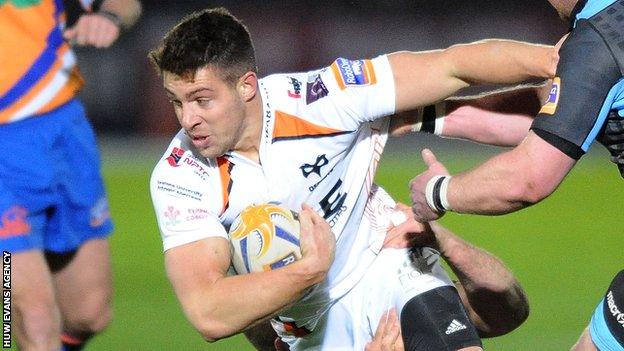 Ospreys scrum-half Rhys Webb could be a doubt for Wales' tour to South Africa in June after undergoing knee cartilage surgery in London on Wednesday.

The 25-year-old injured his knee in the 56th minute of Ospreys' 11-9 Pro12 defeat at Glasgow last Friday.

Webb, who has seven caps, shared the Wales nine shirt with Mike Phillips during the 2014 Six Nations campaign.

"It excluded any signs of ligament damage. However, he has gone to London for keyhole surgery to deal with a cartilage problem.

"Following discussions with the surgeon post-operation, we will be in a better position to discuss any potential return to play date."

Sam Warburton and Leigh Halfpenny are already out of the Springboks tour.

Their fellow British and Irish Lion Richard Hibbard is a major doubt for the two-Test series.

Warburton, Halfpenny and Hibbard have all undergone shoulder surgery.

Webb underwent reconstructive surgery in 2013 after suffering cruciate knee ligament damage, and his region and country will hope that the Bridgend product has not suffered a recurrence of that injury.

Warren Gatland's Wales side will play the Springboks in two Test matches, in Durban on 14 June and Nelspruit on 21 June, with a warm-up match against Eastern Province Kings in Port Elizabeth on 10 June.