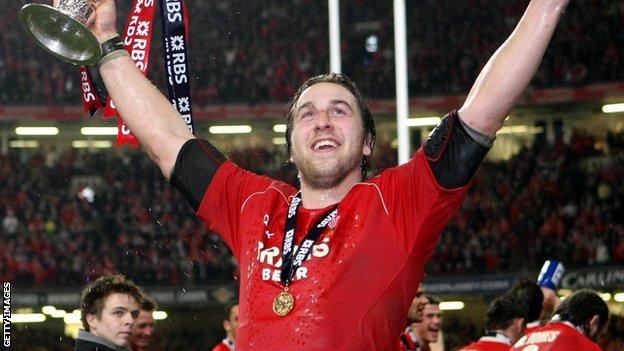 Wales forward Ryan Jones says his ambition to play in the Premiership prompted his move to Championship leaders Bristol.

Jones, capped 75 times, will leave Ospreys for the West Country club at the end of the Pro12 campaign in May.

Bristol have been absent from England's top flight for five years, but have all but secured a play-off place in the second tier this season.

"I want to see how good the Premiership is," Jones, 33, told BBC Radio Bristol.

"Going up there and playing the big boys is a fantastic opportunity for me. It allows me to maintain and fulfil an ambition of being at the top of my game for my whole career."

Newport-born Jones, who can play number eight, blindside flanker and second row, has spent his entire club career in Wales and has made 147 appearances for the Ospreys since his debut in 2004.

The three-time Grand Slam winner knows Bristol director of rugby Andy Robinson from their time with the British and Irish Lions in 2005, and also has a close relationship with former Ospreys coach Sean Holley, who is now Robinson's assistant.

And Jones says the duo had a huge influence on his decision to move clubs.

Race for the play-offs

"Sean Holley is a very good friend of mine and was instrumental in my early career, as was Andy Robinson, who coached me on the Lions tour," he said.

"He [Robinson] has coached sides I've played against and he's one of rugby's true gents.

"We began talking some time ago and it seemed like the right time for me to be part of something that was growing.

"I can't tell you how excited I am. It's a wonderful challenge and I'm looking forward to being part of what is a wonderful rugby club. I'm hoping to help them achieve great things."

Jones holds a record 33 caps as captain of Wales and says the possibility of him skippering Bristol has already been discussed.

"It's come up in conversation. but captaincy isn't a big deal for me," he added.

"I'll bring experience and I'll always have my two-pence worth, whether I wear the captain's armband or not. I just want to integrate with the boys and become one of the team."