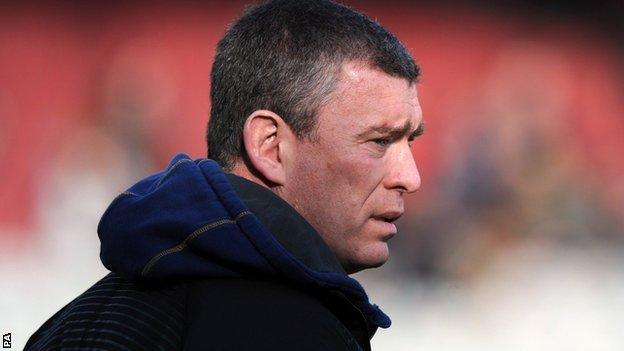 Worcester looked set to end a year-long run of Premiership defeats when they led 11-6 at Sixways going into the final minute.

"I'm not going to let us feel sorry for ourselves. We still think we've got a chance in this," Ryan told BBC Sport.

"As long as it is still on mathematically, then we will still be up for it."

Victory for Worcester would have put Ryan's men within seven points of 11th-placed Newcastle, ahead of the Falcons' trip to Gloucester the following day.

But, on the back of Worcester's 13-11 defeat, although losing 40-33 at Kingsholm on Saturday, Newcastle picked up not only a losing bonus point, but an extra unexpected one for running in five tries.

That enabled them to stretch their advantage over bottom club Worcester to 12 points going into this Sunday's showdown between the two clubs at Kingston Park.

So near and yet so far

If Worcester lose on Sunday, that would leave them at least 15 points behind with just four games left and all but relegated - barring mathematical certainty.

Even if Ryan's men finally end their 22-match losing run in the Premiership, they would still need to win at least two of their final four matches to stand any hope of survival.

But Ryan is keeping a positive attitude.

"As long as the maths still say 'yes', we'll give it a good crack," the Warriors director of rugby told BBC Hereford & Worcester.

"I'm sure half the North East were watching [on Friday] and would have breathed a pretty big sigh of relief.

"We needed to beat Wasps to change the dynamics of the game at Newcastle.

"But we will go up there this weekend to make sure we do the right thing and represent this group in the right way."