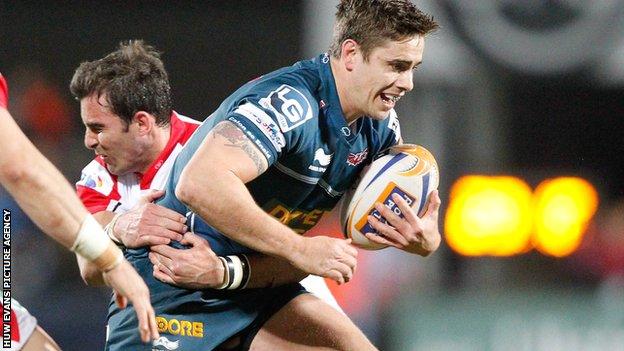 Scarlets have confirmed fly-half Aled Thomas will leave the region at the end of the season.

The 29-year-old made his Scarlets debut in 2004 before spells with Carmarthen Quins, Newport Gwent Dragons and London Welsh.

Thomas rejoined the Scarlets for the 2011-12 season and made 63 appearances.

"I've improved as a player from the time I've spent at Parc y Scarlets," Thomas said.

"I will leave with very fond memories. I've really enjoyed my time here, it's a great group of players."

Thomas was part of the Wales Sevens team that won the 2009 IRB Sevens World Cup, scoring the winning try in the final against Argentina.

Scarlets head coach Simon Easterby said: "Aled has been a valuable and respected senior player within our squad and loyal servant to the Scarlets.

"He has delivered consistently, proved he's an intelligent and reliable player in terms of managing our game and has established a strong goal-kicking percentage.

"We wish him all the very best with the new opportunity ahead of him."