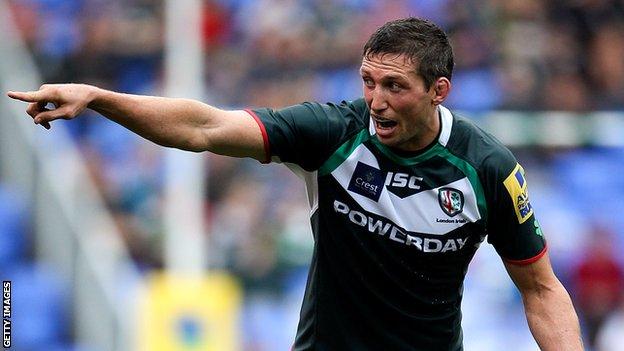 The 34-year-old back rower is the club's longest-serving player in the professional era, having made 275 appearances since joining in 1999.

Danaher - described as a "club legend" by boss Brian Smith - will continue as the club's academy forwards coach.

"It has always been a privilege to wear the London Irish jersey through good times and tough times," he said.

Danaher, who was part of the Exiles' 2002 side that won the Anglo-Welsh Cup, continued: "I have played in some great teams and some great matches.

"It was an honour to win a trophy in 2002 and play in so many other semi-finals and finals.

"I'm looking forward to working with the talented young prospects we have coming through."

Danaher made his Exiles debut in May 2000, and he went on to represent Ireland at Under-19 level and England at Under-21 level.

The Londoner was also on the losing side in the 2009 Premiership final, and was appointed Exiles captain in 2012.

However, in November he admitted he was contemplating retirement and will now focus on his role with the backroom team, which he started last summer.

London Irish director of rugby Brian Smith added: "Declan Danaher is London Irish through and through. He has always been a warrior on the field and a great ambassador for the club off the field.

"He is a true Irish legend and epitomises what is good about the game."