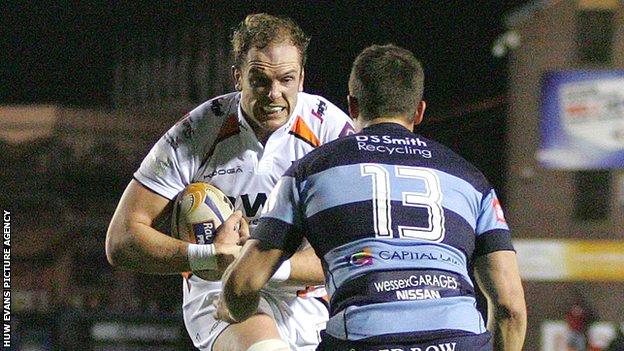 Lock Alun Wyn Jones insists his current focus is on securing a Pro12 play-off spot with the Ospreys rather than Wales' summer tour.

Ex-Wales flanker Martyn Williams believes Jones and Taulupe Faletau should be rested for the tour to South Africa.

But Jones believes there are other things to consider before the attention turns to June's two-Test tour.

"I've got rugby to do here [the Ospreys] first," Jones said.

"I've got to make sure I'm fit here, that I can do the job here. I'm not looking forward to the summer.

"Hopefully we can get through the play-offs. But like I said at the weekend it's a dangerous thing, you end up playing a lot of rugby and you go out there potentially tired.

"But then you stop for four weeks, it's a lot harder to get going.

"We'll see what happens but ultimately my focus is here for the next few weeks."

Wales will face South Africa in the first Test in Durban on Saturday, 14 June and a second Test a week later in Nelspruit.

Head coach Warren Gatland will be without captain Sam Warburton and full-back Leigh Halfpenny, who both have shoulder injuries, for the tour.

Williams, who made 100 appearances for Wales, believes a tough autumn series in 2014 and the World Cup in 2015 means key players need to be rested.

"Players like Taulupe Faletau and Alun Wyn Jones have been on a Lions tour and play every game for Wales and their region," Williams said.

"With a World Cup in mind next year I'd give them a break."

Second-row Jones, 28, played in all three Lions Tests in Australia in 2013, captaining them to a decisive victory in the third and deciding match in Sydney.

He only missed one game for Wales in the 2013-14 season, pulling out of the Six Nations match against France with a foot infection.