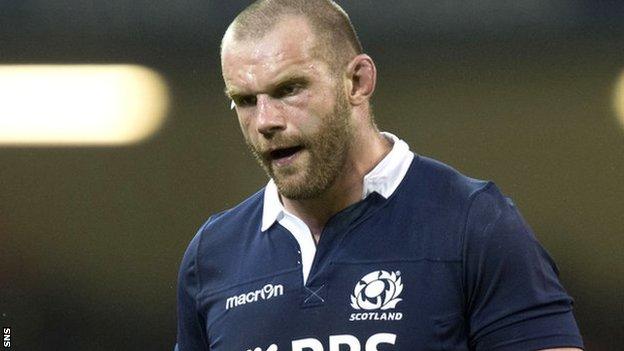 Scotland prop Geoff Cross has switched from Edinburgh to Glasgow Warriors on loan for the remainder of the season.

The 31-year-old will provide injury cover in the front row following an illness suffered by Mike Cusack and injury to fellow tight-head Ed Kalman.

Edinburgh head coach Alan Solomons insisted that it was a coincidence that Cross will leave the club this summer.

"Glasgow are in a situation where they have only two fit tight-head props," said the South African.

After eight years and aged 31, I think the time is right to seek a change and a new challenge. I'm very excited by this next chapter of my career

"They approached us for senior cover in what is an extremely important position and requested Geoff Cross on loan.

"There comes a time in a player's career, especially when you've been at a club for a long period, that you realise you could benefit from something fresh and new, and Geoff has secured such an opportunity at a new club."

As Cross heads on loan, young Scotsman Ewan McQuillin has been promoted from Edinburgh's development programme into the squad for Friday's Pro12 game against Ulster at Murrayfield.

Most recently with Canterbury, Berghan will now arrive next month instead of next season.

Cross, who made his Edinburgh derby against Glasgow in December 2006 and has made 130 club appearances and earned 28 Scotland caps, was looking forward to his move west.

"I've been an Edinburgh player for a long time now," he said. "I've made some good friends and shared in some special moments on the pitch.

"After eight years and aged 31, I think the time is right to seek a change and a new challenge."

Moray Low and Jon Welsh were Glasgow's only tight-head options after it was confirmed that Cusack faced another spell on the sidelines.

The 29-year-old returned to action last month after more than a year out with a shoulder injury but became unwell prior to the defeat by Leinster earlier this month.

Glasgow say that "following further investigation, it has been determined he'll not be able to play for an extended period, with the exact length of time unknown".

With Kalman out of action with a back injury, Warriors head coach Gregor Townsend was pleased to be able to add a player who featured in all five of Scotland's Six Nations games, starting against France and Wales and coming off the bench in matches against Ireland, England and Italy.

"Mike worked really hard to get back fit again and we're all disappointed that his comeback has been put on hold," said Townsend.

"It's also disappointing for Ed that he's picked up a back injury after being in great form for the club this season.

"Hopefully we'll see him in a Warriors shirt before the end of the season.

"We're delighted to welcome Geoff into our squad. We're getting an experienced tight-head to strengthen our front row options as we push for a play-off spot."