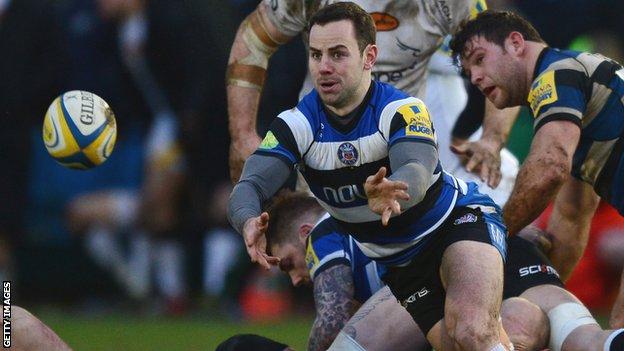 Bath head coach Mike Ford says anything other than a top-four finish in the Premiership this season would be a failure for the club.

Ford's side return to domestic action on Saturday against London Irish sitting third in the table, level on points with fourth-placed Leicester.

"We're in a good place with six games to go," the 48-year-old told BBC Sport.

"In the position we're in at the moment, it would be a failure not to finish in the top four."

Ford continued: "We're under no illusions - we know it's going to be tough against whichever team we play in whichever competition.

"But we put ourselves under pressure to do it."

Bath's last play-off attempt came in 2010, when they lost in the semi-finals to eight-time champions Leicester.

Last year was Ford's first term at the Rec alongside former director of rugby Gary Gold and they finished seventh in the table.

Ford was placed in sole charge following Gold's departure in December, and since then his side have only lost twice in the league - against league leaders Northampton and second-placed Saracens.

Bath also reached the LV= Cup semi-finals this season, losing to eventual winners Exeter, and are in the knockout stages of the Amlin Challenge Cup.

"If you'd asked me at the start of the season I'd have said top six in the Premiership is good. The top four teams - Saracens, Northampton, Leicester and Harlequins - are pretty hard to break into," added Ford.

"And after last year it's nice to be in these positions, but it's not what we want.

"Getting to quarter-finals, semi-finals and play-offs is not good enough for us anymore. We're here and we want to win trophies."

But recent success has been sparse; they have not won a major competition since their Challenge Cup victory in 2007-08 and are yet to secure the Premiership title.

Wing Matt Banahan was in his second year at Bath when they last lifted a trophy and, six years on, says the club can end their wait for silverware.

"Every team has their year," he said. "You look at football... Liverpool had their 10 years, and then it went to Manchester United. Things go in full circle and it has to for Bath, especially with the way we are playing.