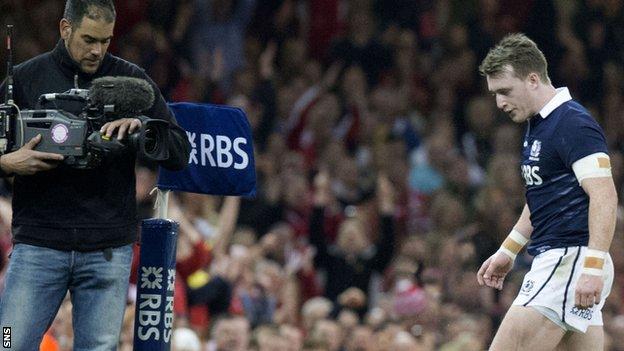 Hogg was dismissed by French referee Jerome Garces in the 22nd minute of the 51-3 hammering for a late shoulder-led hit on Wales fly-half Dan Biggar.

"I would like to apologise to my team-mates, the Scotland management and all Scotland supporters," said Hogg.

"I have said sorry to Dan Biggar and I have apologised to the referee."

I always try to play hard and fair and what happened was out of character for me. Once again, I am very sorry

Garces initially showed Hogg a yellow card, but he changed it to red after viewing replays of the incident on the Millennium Stadium's big screens.

Scotland had already lost captain Kelly Brown through injury and their 14 men could not resist a rampant Wales, who ran in seven tries to record their biggest win over the visitors.

"I have let people down," Hogg said in a statement.

"I always try to play hard and fair and what happened was out of character for me. Once again, I am very sorry."

Hogg became only the third Scotland international to be sent off in a Test match after Nathan Hines against the USA in 2002 and Scott Murray against Wales four years later.

The Glasgow Warriors back will now face a disciplinary hearing, with the prospect of a ban.

Scotland's defeat in Wales left outgoing head coach Scott Johnson's side second bottom of the Six Nations table with only one victory, against Italy in Rome.

Johnson has defended Hogg, stressing that the full-back is not a dirty player.

Meanwhile, forward Richie Gray claims Scotland were not smart enough to cope with going a man down against rampant Wales.

"It was very tough to take," said the Castres lock. "We went down to 14 me,n but even then we should not have conceded as much as we did.

"I can't fault the boys for effort and heart, but we should have played a little smarter.

"We need to get the details right when situations like that do arise.

"It's a very sour note to finish the championship on. Everyone in the changing-room is hurt.

"The scoreboard doesn't look the best but everyone fought hard and never gave in. We can take pride from that."

The defeat surpassed the 51-9 drubbing dished out to the visitors by France in 2003.

"We are all embarrassed by that result," added Gray. "At this level, to get 50 put against you just should not happen.