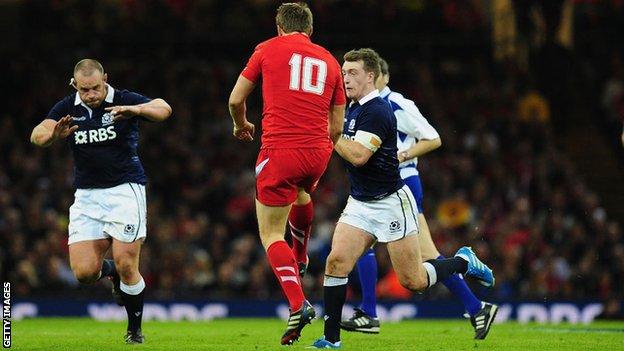 Fly-half Dan Biggar believes Wales would have beaten Scotland even if they had kept 15 players on the field in their Six Nations match on Saturday.

Wales crushed the Scots 51-3 after Stuart Hogg was sent off for a late tackle on Bigger in the 22nd minute.

The 48-point margin was Wales' best in the tournament, and Scotland's biggest loss.

"Even if they had kept 15 men on the field I think we would have come away comfortably in the end," said Biggar.

Wales were leading 10-3 when full-back Hogg caught the 24-year-old Ospreys player with a late shoulder charge.

The British and Irish Lion was initially shown a yellow card by referee Jerome Garces, before being summoned back onto the pitch and given a red after the incident was shown on the stadium screens.

Wales ruthlessly exploited their extra man, scoring seven tries in a victory that eclipsed the 47-8 win they recorded over Italy in 2008.

Biggar was making his only start of the tournament and helped himself to 14 points with two penalties and four conversions.

And while he accepted the red card distorted the final score, he felt Wales were in control before the incident.

"It was one of those when everything sort of clicked for us and obviously the sending off helped us - it made us a little bit more comfortable," he said.

"But I thought we played some decent stuff up until then, maybe a little bit inaccurate from turnovers but overall it was a great day to be part of.

"It's just a shame that those two away performances [against England and Ireland] meant we couldn't have something else to play for today."

Biggar was happy with his own performance after playing second fiddle to Scarlets stand-off Rhys Priestland for the rest of the tournament.

"When you get your chance you want to make the most of it and I think I did okay, I wouldn't say any more than that.

"We need to keep our feet on the floor, obviously playing against 14 men helped us a lot."

Scotland's interim coach Scott Johnson - who used to coach Biggar at the Ospreys - said Hogg's tackle was "out of character".

"He's not that sort of player and he felt he let the team down," said Johnson.

"He's apologised to the team and he went in to apologise to 'Bigs' [Biggar] after the game."

Wales coach Warren Gatland said he was not surprised that referee Garces had changed his decision after seeing the replay of the incident.

"You've got to feel sorry for Stuart - he's not that sort of player at all. It's a rush of blood to the head and he's made a mistake," said Gatland.

"When we saw it on the box, we asked Sam Warburton to get to him [the referee] and get the television match official to have a look at it.

"Sam hadn't even got to him when the referee had seen the big screen and made the decision [to send Hogg off]."