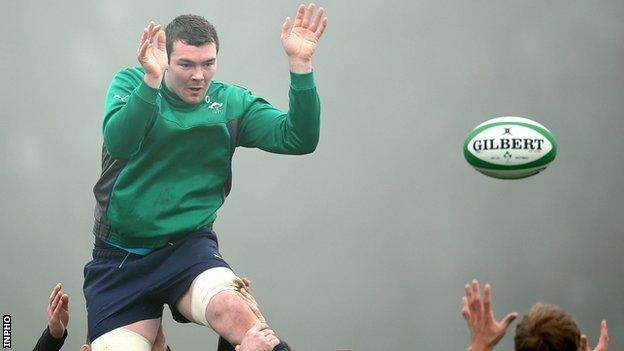 Ireland's Peter O'Mahony insists that the sentiment surrounding Brian O'Driscoll's last appearance in a green shirt will take a back seat when Joe Schmidt's side face France on Saturday.

Ireland start their game in Paris as favourites to win the Six Nations.

"It is an important week for Brian, obviously, and it would be great to help him finish on a high, but I've got to worry about myself," said O'Mahony.

"You have to make sure you get your own things right and do your own job."

O'Driscoll and Ireland have fought desperately this week to fend off talk of the iconic centre ending his international career in fairytale style with a second Six Nations title.

"It would be great for Brian, but it's such a big week for everyone," added O'Mahony.

"We haven't talked about us being special, nor this game being anything other than what it is. It's a cup final for us - we've got to get our job roles right from the start.

"Of course the importance comes through, you feel the pressure, without any doubt this is the biggest week of my career so far.

"You're certainly putting pressure on yourself, trying to turn it to your favour and use it as motivation.

"Since you're small you want to play in games like this for trophies, it's the reason the game is so great, to compete for these sorts of trophies."

Ireland are hoping for just their third win in Paris in 42 years, a win which should see them mark O'Driscoll's 141st and final Test appearance by winning the championship.

O'Mahony says Ireland will hope routine and reason can help them shrug off the intimidation factor that always creates a daunting Paris atmosphere.

"It's just such a tough place to come and play," said the 24-year-old Munster flanker, who sat out last week's win over Italy in order to overcome any lingering effects of a hamstring injury.

"The French are hugely passionate, and a hugely able team, and when they're at home they're even stronger again.

"It's a very intimidating place to come and play, it's one of the toughest stadiums to come and get a win. That's the main reason we've struggled.