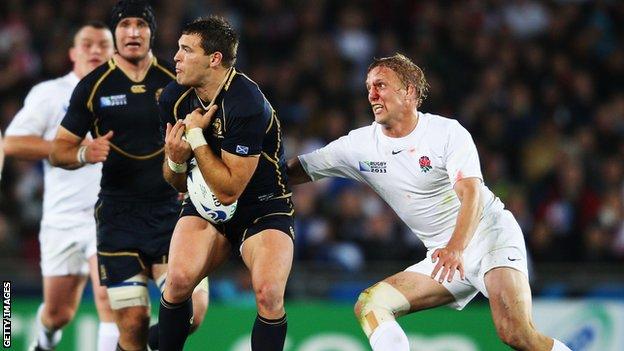 Scotland are in danger of vanishing as an international rugby force, according to former England captain Lewis Moody.

The 35-year-old thinks the Scots are hampered by having only having two professional clubs - Glasgow Warriors and Edinburgh - in the Pro12.

"They really need to sort their rugby out up there," he said.

"I think we might see Scotland disappear over the next couple of seasons, certainly the next decade, as an international rugby force."

Since the Borders Reivers were disbanded in 2007 as a cost-cutting measure by Scottish Rugby, there have been just two Scottish sides in the professional set-up.

The part-time local clubs that existed before the formation of those three professional organisations continue to compete in the Scottish Premiership.

Johnson's got his work cut-out. They have two professional sides to choose their national team from, so it's a huge ask

And Moody told BBC Radio Wiltshire that the Scots need to "get some of their old classic rugby teams back in the mix and get some more talent coming through, certainly at a younger level".

Director of rugby Scott Johnson has been in interim charge of Scotland while prospective new head coach Vern Cotter runs down his contract with Clermont Auvergne and he has made no secret of his experimentation ahead of next year's World Cup.

The Scots go into their final Six Nations game under the Australian with just one victory - in Italy - in this season's tournament,

While Scotland remain 10th in the world rankings - just ahead of Fiji - despite last weekend's defeat by France, Moody rules out their chances of beating Wales in Cardiff on Saturday.

"Wales, as a bad as they were against England, certainly have too much for Scotland," the former flanker said.

"I think Scotland have made six changes; they are not quite sure where they are as a team at the minute under Johnson.

"He's got his work cut-out, mind. They have two professional sides to choose their national team from, so it's a huge ask."