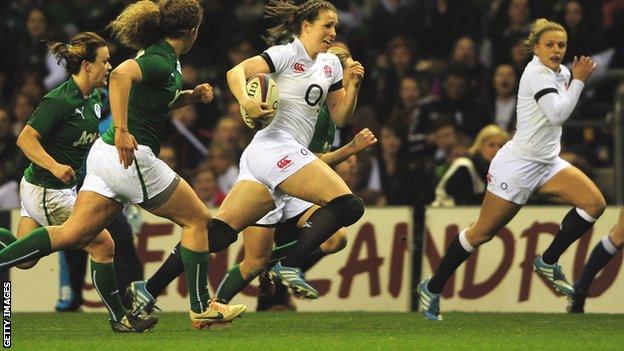 Much like the men's tournament, the Women's Six Nations reaches its conclusion this weekend with three countries still in contention to lift the title.

France, with four wins from four, are in pole position but defending champions Ireland and England could still claim the crown.

In simple terms, if France beat Ireland on Friday night they will lift the title and win the Grand Slam. It would be their first title since 2005 and set them up nicely ahead of hosting the World Cup in August.

If Ireland manage to win at Pau's Stade de Hameau, then England could come up on the rails with a big victory in Italy on Sunday, provided they can overtake France and Ireland's points differential.

The performances of the French women have been the surprise package of this campaign. The increase in their fitness, intensity and game awareness since the autumn Internationals is palpable.

Their playing style is focused on using their weighty pack to either crush the opposition up front or create space for their creative backs. This is their tournament to lose and they have never lost at home to anyone in the Six Nations, other than England.

Ireland did come close to winning in France two years ago, losing by just a point, 8-7, at the same venue where they meet on Friday.

As reigning champions, the Irish needed to prove last year's title was no fluke, and despite losing 17-10 to England at Twickenham, they have more than demonstrated their continuing improvement.

Head coach Philip Doyle feels their biggest task still lies ahead. "The team put in a fine performance against Italy in their first ever game at the Aviva Stadium but we are under no illusions as to the challenge ahead of us," he said.

"France are the form team of the Championship and beat England reasonably comfortably in round one. We will need to match their physicality and take our chances when they come."

Should Ireland beat the French and inadvertently allow England to regain the Six Nations title they relinquished last year for the first time in eight years, there would no doubt be a tinge of frustration.

But Ireland have come of age in women's rugby in the last 12 months, and their World Cup pool match with champions New Zealand will now be one of the most eagerly anticipated of the opening skirmishes in Paris in August.

By the time England step out onto the field on Sunday (1400 GMT) against Italy at Rovato's Stadio Giulio e Silvio Pagani, they will know if they can still win the Championship or are simply playing for pride.

The Red Roses were everyone's favourites tat the start of the tournament. But France's win in round one served as a timely reminder to Gary Street's side that the rest of Europe is catching up with them.

The return of England's top players has yet to see the squad achieve the same high standards as 2012, when they completed a three-Test series whitewash over New Zealand.

There are still players expected to return and strengthen the England squad. Bristol's Danielle Waterman is back from injury and restored to the full-back shirt against Italy.

England head coach Gary Street said: "It's great to have a fully fit Danielle Waterman back in the squad who I hope can add something different to the team. Having such depth of quality in our squad does make it a challenge to keep consistency but as this is our last game before the World Cup, we have got to give players game time.

"We are confident that we have improved throughout the championship and we know that the only thing we can now control in this season's Six Nations is putting on a good performance against Italy."

Waterman's return pushes Lichfield's Emily Scarratt, player of the match in last Friday's 35-3 win over Wales, to outside centre.

At just 24, Scarratt will win her 50th cap on Sunday. Ever since her inclusion in the squad at the age of 18, her kicking prowess and physical presence has made her one of the first names on the England team sheet. Touted as a future captain and household name like Maggie Alphonsi, she is unfazed about reverting to a midfield role.

"I don't really mind," she told BBC Sport. "I've played a lot of 13, and quite a bit of 15 now as well. To be honest I just take being on the pitch, it doesn't really matter what number I've got on my back."

Replicating their male counterparts, England's women may have cause to rue their opening result in this year's campaign.

Losing 18-6 to France was a shock and Scarratt admits the team are still not over it.

"If you asked any of the girls if we could go back and play that game again, I think we'd all bite your hand off," she added. "It's put our Six Nations campaign under the cosh a little bit, but we're looking forward to this weekend. Obviously we hope Ireland can go to France and do a job on them to put us back in the running."

Whichever country wins this Six Nations title, it is clear England are no longer the dominant force they were from 2006 to 2012.

This can only be good news for women's rugby in the northern hemisphere, if a trifle worrying for England ahead of the World Cup.