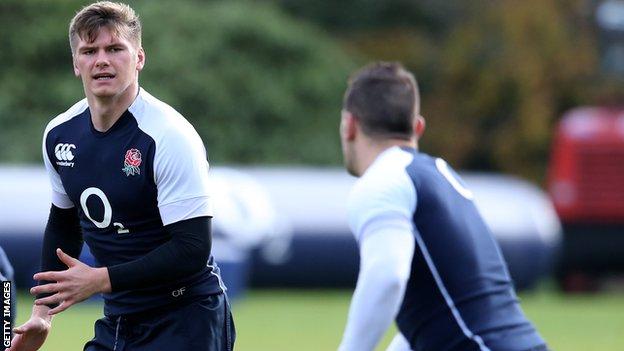 England's good form in this year's Six Nations - only a last-gasp defeat against France prevents them from going to Rome seeking the Grand Slam - can be attributed to any number of factors: a stronger mentality, an improved physicality, a watertight defence, settled combinations at lock and in the centre, and an impressive attacking game, exemplified by the outstanding Mike Brown at full-back.

But it's at half-back where Stuart Lancaster's side have also shown a sharpness and verve, with Danny Care and Owen Farrell excelling throughout the Championship.

Last weekend the pair comprehensively outplayed the two Rhyses - Webb and Priestland - with Care's opportunistic early try setting the tone for England's first-half dominance over the Welsh, while Farrell's kicking - from hand and tee - was faultless.

The two have struck up an instant rapport, surprising considering they had never started a Test match together before this year's tournament. Now they are set to start all five of England's Six Nations games in tandem.

"I'm really enjoying working with Owen, I thought he was exceptional on the weekend," Harlequins scrum-half Care says. "We work well with each other and I think we bring the best out of each other."

Farrell agrees. "I've loved playing with him," he told BBC Radio 5 live. "We react well to each other.

"He's very sharp and his control has been brilliant. He can turn a game on its head by taking advantage of things no-one else sees, and I'm just happy to play off the back of it."

It is the first time in his tenure that Stuart Lancaster has stuck with the same nine and 10 combination for the duration of the Six Nations, and the England head coach has been impressed with the way the two have complemented each other, citing improvements in both of their individual games.

"Danny's distribution has been excellent," Lancaster said. "He delivers it quickly, and his speed to the breakdown has helped as well. His kicking game has also helped Owen."

Saracens player Farrell, too, has produced some of his best displays for England in the past two months, according to the head coach. "Absolutely. He's really got to grips with his depth, and tempo, and altering his lines and [improving] his communication and leadership. The whole back-line has improved in that regard, and credit must go to [assistant coaches] Andy Farrell and Mike Catt."

And while Lancaster is aware he will have to break up the combination at some point in the future, he agrees that consistency of selection in such a key area has been significant.

"I think it has been important. But the reality is in a World Cup you play seven games in seven weeks, and there is no way the nine and 10 will play together for all seven weeks, so you have to make sure everyone can play and interact with each other.

"But their relationship has grown and blossomed, and it's been nice to have that consistency in the half-backs, and in the backline as a whole."

Two years ago, Farrell travelled to Italy with just one cap under his belt, and played at outside centre as England scraped a 19-15 win in Lancaster's second game in charge. Now the 22-year-old goes to Rome as a seasoned international, and one of the ever-presents of the Lancaster regime.

"I was young then," he laughs. "Hopefully I've come a long way since then."

Meanwhile after often playing third fiddle to Ben Youngs and Lee Dickson over the past couple of seasons, 27-year-old Care has enjoyed an international renaissance as he nears his 50th cap, and says he is playing his best rugby yet in an England shirt. He is also keen for the partnership with Farrell to become a permanent fixture.

"We'll hopefully keep developing," he says. "I'd like to play as many games as I can with him, and hopefully be really successful."

With Youngs, Lee Dickson, Richard Wigglesworth, George Ford, Freddie Burns and Stephen Myler all on the England radar - not to mention Danny Cipriani - there is no shortage of competition at half-back. But as the World Cup edges closer, Care and Farrell - on current form - will take some ousting.