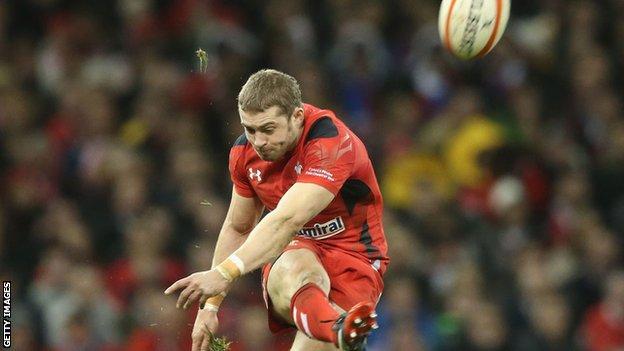 Wales captain Sam Warburton is not surprised by the injury suffered by Leigh Halfpenny during Wales' 29-18 defeat against England.

Full-back Halfpenny, 25, is to undergo surgery on the right shoulder he dislocated at Twickenham, and will miss Wales' tour of South Africa in July.

"It was (Halfpenny's) 27th game this season," said the Blues flanker.

"When you think about it like that... it's not surprising that he's picked up a knock on his shoulder."

Halfpenny was injured as he pulled off a try-saving tackle on England centre Luther Burrell.

Warburton warned that fatigue could be a contributory factor in many injuries, and believes international players are likely to suffer significant injury lay-offs every three seasons.

"That's just the way international rugby is nowadays," he said.

"They're 10-month seasons and you've got to look after your body.

"I don't think you'll go more than three years without picking up a decent injury (with) a month or two lay-off at this level."

In addition to Halfpenny, Wales will be without scrum-half Rhys Webb against Scotland in their final Six Nations match of the season after he injured an ankle in Twickenham.

The injury list already included second row Bradley Davies and centre Scott Williams, who will not play again this season after injuring his shoulder in the 26-3 defeat against Ireland.

Warburton himself did not start in the 23-15 win over Italy as he recovered from injury while centre Jonathan Davies, prop Gethin Jenkins and lock Luke Charteris have missed games in this year's tournament because of injuries.

"I think that's just part of the game now and you've just got to accept that as players," said Warburton.