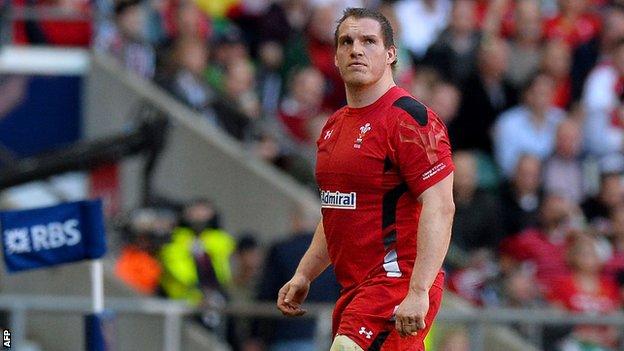 Wales coach Warren Gatland says that Gethin Jenkins deserved to keep his place at prop for the Six Nations game against Scotland in Cardiff.

The British and Irish Lion is the only front-row to keep his place after the 29-18 loss in England, with Adam Jones and Richard Hibbard sent to the bench.

"We've got to stick with him and give him the faith," Gatland said.

"We've worked really hard on getting his scrummaging right. He's a competitor.

"He's gone from man of the match against France to being penalised a few times against England and being yellow-carded.

"We've been working with the referees and trying to get some clarity on that. We've come out and supported him.

"As a competitor, as a warrior, you don't get anyone tougher than Gethin. He's desperate to want to win and perform in every game."

Cardiff Blues prop Jenkins, 33, will move one cap ahead of former fly-half Stephen Jones to 105, while the 33-year-old has also won five caps for the Lions.

He will line up in the Wales front-row alongside Scarlets pair Ken Owens and Rhodri Jones.

"It's a great milestone for him in terms of being the leading Welsh-capped player of all time," Gatland said.

"He's been a great servant to Welsh rugby and he deserves all those accolades.

"As a team we need to go out there and reward him by giving the performance he deserves in terms of what he's given to Wales."

As well as the two changes in the front-row, Gatland has recalled fit-again lock Luke Charteris, named Liam Williams at full-back in place of the injured Leigh Halfpenny, and changed both his half-backs.

Mike Phillips comes in at scrum-half for Rhys Webb, who injured an ankle in the Twickenham defeat, while Dan Biggar is preferred at fly-half over Rhys Priestland.

"We felt we needed to freshen up a little bit and make a few changes, and then some of the other changes have been forced on us with injuries," Gatland added.

"Dan has been a bit unlucky and we've given Rhys an opportunity there. In a pivotal position like outside-half you want to try and give a player a run of games.

"There's a chance now for Dan to come back in the fold.

"He did exceptionally well last season and there's a lot of competition in that position, and hopefully he'll make the most of his chances."