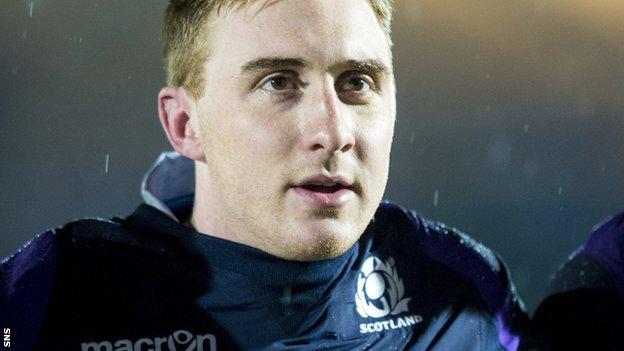 Scott Johnson had delayed naming his team for the trip to Cardiff amid injury doubts over Max Evans and Tommy Seymour.

Evans has been passed fit and will earn his 42nd cap in the final game of the current campaign.

In the forwards, Johnson has restored Ryan Wilson to the back row in place of the injured Johnnie Beattie.

The Scots are seeking to end their campaign on a winning note following defeat by France at Murrayfield by defeating Wales for the first time in 10 years.

Flanker Alasdair Strokosch returns to provide cover on the bench for the Scots, who will be aiming to secure their second win of the championship.

Prop Alasdair Dickinson has recovered from the calf injury he sustained in Rome last month and is also among the substitutes.

Johnson was pleased with the performance against France but admits to frustration at the result.

The Scotland coach believes his side should have won that game "convincingly" - along with the previous one, when they narrowly edged out Italy.

"We've got to live by that and it would be nice to put in a performance against Wales," he said.

On handing 23-year-old Fife his Scotland debut, Johnson said: "We like Dougie's size and his competitive edge. He chases everything, which I like, and he has shown really good glimpses playing for Edinburgh this season.

"He's been ear-marked by us for a while - we've been following him for the last 12 months - and he's got his reward now. If he gets this one right, you might find that he puts a bit of pressure on (for a place) going forward, which is really good.

"They will be hurting from their loss and they are now out of the championship, so it is two sides that are hurting and wanting to put on a good performance and we're looking forward to it."

Fife said he is relishing the prospect of making his debut in Cardiff.

"I'm absolutely delighted and can't wait," he said. "The Millennium Stadium with the roof closed - I don't think it could be much better, to be honest.

"When I got a run of games with Edinburgh and started doing fairly well I felt I could be on the brink (of a Scotland call) if I stuck in. Luckily I've been patient and my time has come."

Johnson believes his squad now has the necessary strength in depth to compensate for any more injury absentees.

"At the moment, we are going to have quite a few of our team under duress, injury-wise, and not available for selection," he said.

"Yes, we've missed some players, but it's given other people a chance.

"So can we go down there with a different group of players and compete? Yes. Will we? Yes.

"What I'm asking for is a bit more consistency. If we get the consistency, the scoreboard will look after itself."