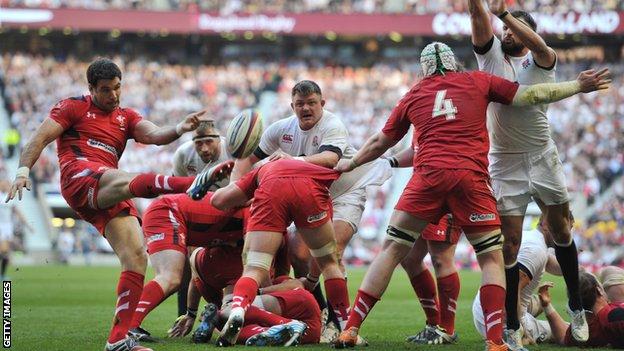 Dan Biggar replaces Rhys Priestland at fly-half and Mike Phillips comes in for the injured Rhys Webb at scrum-half.

Liam Williams fills in at full-back after Leigh Halfpenny dislocated a shoulder in the loss to England.

Perpignan's Charteris suffered a neck injury in training before last week's defeat at Twickenham but returns to the side to partner Alun Wyn Jones for the game in Cardiff, with Jake Ball dropping to the bench.

Despite being sin-binned in successive Six Nations games against France and England, loose-head Gethin Jenkins keeps his starting spot and will become his country's most-capped player.

The Cardiff Blues and Lions prop will make his 105th appearance on Saturday, moving one ahead of former fly-half Stephen Jones.

Jenkins will feature in a new look front-row alongside Scarlets pair Owens and Rhodri Jones, who get their first starts of the campaign.

The back row remains unchanged, with captain Sam Warburton playing alongside Dan Lydiate and Taulupe Faletau.

Gatland also keeps faith with the three-quarter line that started Sunday's game at Twickenham, with Jamie Roberts and Jonathan Davies at centre and Alex Cuthbert and George North on the wings.

Wales will be intent on finishing the competition on a high against a Scotland team who are looking for their first victory in Cardiff since 2002.

"Saturday is an opportunity for us to put in a performance we know we can and finish the Six Nations on a high," said Gatland.

"We've made a number of changes and freshened things up with a just a six-day turnaround between matches.

"Scotland will come looking to play some rugby and had a morale boosting win against Italy and were unlucky to lose against France in recent weeks."

Ospreys duo Hibbard and Adam Jones drop to the bench alongside Paul James, Jake Ball and Justin Tipuric as the forward replacements.