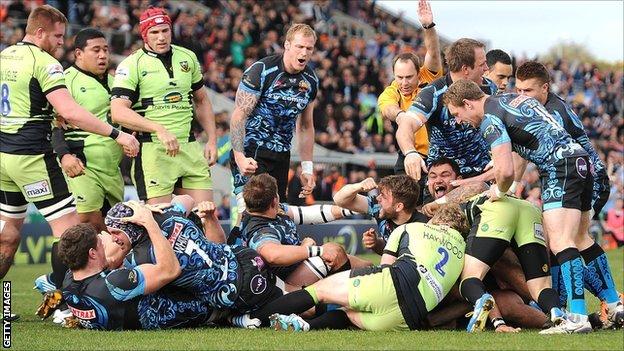 Exeter Chiefs beat Northampton Saints to win the LV= Cup and lift their first major trophy in their 143-year history.

Chris Whitehead, at the heart of a catch and drive, touched down in the opening stages before Glenn Dickson and Henry Slade traded penalties.

Dean Mumm finished a slick Exeter move after the break, only for Samu Manoa to claw one back in the corner.

But there was no way back for the Premiership leaders, who now lose their opportunity to claim a domestic double.

It caps an era of firsts for Rob Baxter's progressing side, who made their Premiership debut in 2010-11 and experienced the Heineken Cup for the first time last season.

For Saints, it continues a worrying trend in major finals, having fell at the last stage in the Heineken Cup in 2011, this competition in 2012 and the Premiership's Twickenham showpiece last year.

Between them, both sides have used a combined total of 87 players throughout this competition this season

The game was being played at Exeter's ground, although it was technically a neutral venue as it was chosen back in November.

The Chiefs were spurred on by a boisterous and sold-out Sandy Park crowd and made their attacking intent clear early on by opting to kick a penalty on the Saints 22-metre line for a line-out.

And they were rewarded for their adventure, as Whitehead collected Damian Welch's throw and was propelled over the line by a thunderous Exeter drive.

Slade put the conversion wide and Dickson, who was not even in the Saints squad at the start of the day, put a penalty between the posts in response.

The New Zealander found himself promoted from the travelling party to the number 10 shirt after a hamstring injury ruled out Stephen Myler and Will Hooley was laid low by a concussion.

Northampton, beginning to see plenty of the ball, found themselves coming up against a brutal Exeter defence, particularly in the opposing 22, where Chiefs successfully survived two scrum resets only one metre from the line.

And Slade punished Jim Mallinder's side by popping over a penalty to restore Exeter's five-point advantage going into the break.

Northampton, becoming increasingly frustrated at Exeter's resilience, were caught off guard when the Chiefs suddenly upped the tempo, with Kai Horstmann and Fetu'u Vainikolo combining well to feed Mumm, who had plenty of work to do on the inside to clatter over with a host of Saints shirts attempting to haul him back, allowing Slade to kick the extras.

Luke Arscott almost put the Chiefs out of sight, jinking through the Saints defence before being cut short inches shy of the line by a superb George Pisi tackle.

Northampton mounted sustained pressure and found a breakthrough when Christian Day fed Manoa to touch down in the corner.

Dickson failed with the boot and at the other end Slade saw a penalty come back off the post, keeping Saints within a converted try of levelling.

But Exeter's ferociousness never faded as they ended almost a century and a half without a top-level prize.