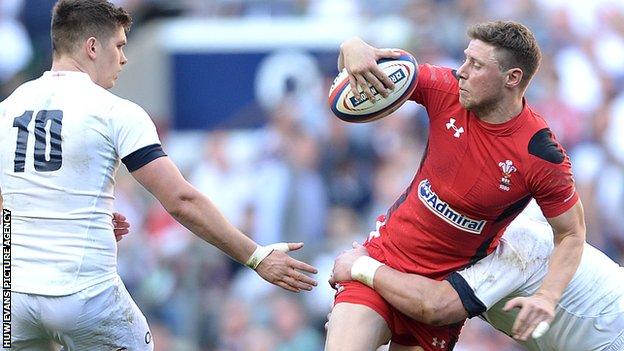 Scarlets coach Simon Easterby does not believe he will have to rebuild Rhys Priestland's confidence on his return from Six Nations duty with Wales.

The fly-half was criticised following defeat to England and has been replaced by Dan Biggar for the Scotland game.

Easterby says the 27-year-old will be focused for Scarlets' remaining games.

"I'm sure he'll be coming back full of beans and looking forward to contributing to the end of the season," said Easterby.

"That will be his focus after the end of the Six Nations and he's a really important for what we are here, and he will be into next season."

Priestland has agreed a new contract with stay with the Scarlets along with Wales team-mate Scott Williams instead of opting for a Welsh Rugby Union contract.

However, fellow Welsh internationals Jonathan Davies and Josh Turnbull will be leaving the region at the end of the current campaign.

Centre Davies has signed a two-year deal with Clermont Auvergne in France while back-row forward Turnbull will move to Welsh rivals Cardiff Blues.

Despite the losses of Davies and Turnbull, Easterby is confident he will have assembled a strong squad in time for next season.

"We're pretty much close to retaining everyone we want to retain.

"Obviously Jon has left by his own accord and Josh Turnbull has also left.

"But the retention has been very good and we've pretty much done all that.

"On recruitment we're further down the line than we were this time last year, definitely.

"The board have been excellent in supporting early recruitment and understanding how important it is to get things in place earlier rather than leaving it until June/July when a lot of players are off the market."

Meanwhile Turnbull, 26 and with more than 120 Scarlets appearances, insists he is fully committed to their bid for a top-four Pro12 play-off spot.

He said: "It took me a long time to come to a decision about leaving somewhere that I've called home for seven years, I've been here a long time in the senior environment.

"As a player, I owe it to this club, you can't just say you're not committed anymore.

"For me personally nothing changes, I'll still be as committed as ever."