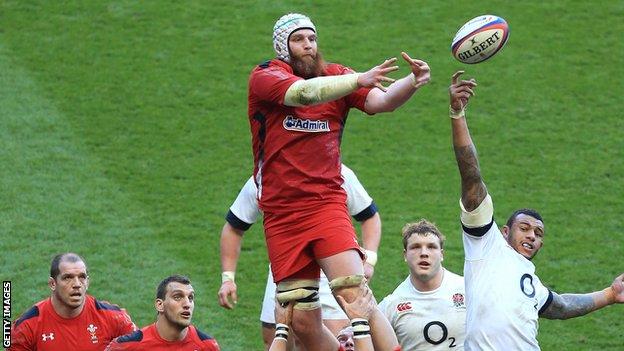 Alun Wyn Jones believes the emergence of fellow Wales second-row Jake Ball has been one positive to come out of a disappointing Six Nations campaign.

A 29-18 defeat to England at Twickenham on Sunday ended Wales's hope of retaining the title, having also lost 26-3 in Ireland on 8 February.

Ball, 22, was a late call-up to the starting XV against England as well as the 27-6 win over France.

"Both opportunities he's had, he's held his own," said Jones.

Scarlets lock Ball made his international debut for Wales against Ireland as a second-half replacement.

But when British and Irish Lion Jones pulled out of the France game just before kick-off with a foot infection, Ball made his first start.

When Ospreys second-row Jones recovered in time to face England, Ball was expected to return to the bench.

But a neck injury sustained by Luke Charteris in training saw Ball again start and stake his claim to become a Wales regular.

"Sometimes it's better when you come in late because you have less time to think about things and just get on with it," Jones said.

"But the two showings he's had I think he's held his own very well and he's got a definite future in the red jersey.

"With the likes of Jake coming in and a few of the other young boys putting their hands up, there's definitely positives on the horizon."

Wales are out of the running for the title - and the chance to become the first side to claim the championship three years in succession - with Ireland, France and England the only teams who can win it.

But Warren Gatland's side can still finish their campaign on a positive note by beating Scotland at the Millennium Stadium in Cardiff on Saturday.

"The overriding feeling of disappointment is still there, ultimately we lose the game [against England]," Jones said.

"We're just lucky that we've got the opportunity to play another game I suppose and end this tournament on a high."

Scotland have just one win this campaign, against Italy, but Jones believes they have steadily improved during the tournament and will be no pushovers.

"They took a lot of stick in the first two rounds, but they seem to be growing in confidence and the play that they're putting out there," Jones added.

"It's going to be a tough ask, especially when they realise we're coming off a loss.

"[Lions tourist Richie Gray's] omission raised a few eyebrows, but... he and Scott Hamilton seem to be working well together [now], probably the tallest second-row pairing in the competition.

"Not only is their pack growing, but the players that have got in are obviously making a difference."

Warren Gatland names his team to play Scotland at 11:00 GMT on Thursday, 13 March.