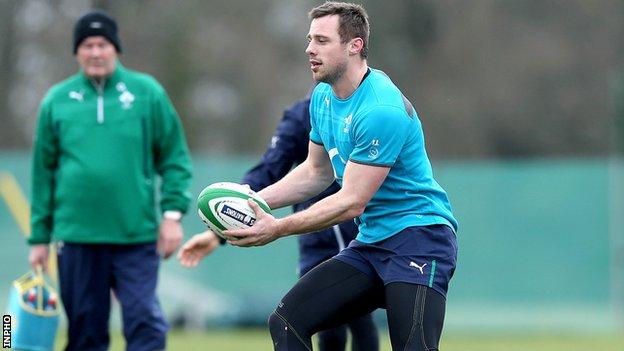 Tommy Bowe will not be involved in Ireland's crunch closing Six Nations game against France after being released back to the Ulster squad.

The wing scored two tries as made his return to action after nearly three months out while playing for Ulster against the Dragons on 28 February.

Bowe did train with Ireland last week but team manager Mick Kearney said on Monday he would not feature in Paris.

Peter O'Mahony is expected to be fit after missing the win over Italy.

O'Mahony was replaced by Ulster youngster Iain Henderson in Saturday's 46-7 victory over the Italians but the Munster flanker is in line to return to Joe Schmidt's side this weekend.

"Peter O'Mahony has made an excellent recovery from his hamstring strain and is expected to train fully this week," said Kearney on Monday afternoon.

Kearney also reported that prop Cian Healy is expected to train on Tuesday after being forced off a knock early in the second half of Saturday's game.

Healy sustained a knock to his ankle when scoring a try after the interval at the Aviva Stadium and was rested from training as a precaution on Monday.

Scrum-half Conor Murray is also expected to be available for selection after being replaced in the first half of Saturday's game because of a stomach upset.

"As a precaution he (Healy) was put in a boot overnight. We expect Cian will train tomorrow and Conor Murray's tummy bug has settled," added the Ireland team manager.

An Ireland win of any description will secure Schmidt's side the Six Nations Championship unless England manage to beat Italy by more than 50 points.

However, Ireland have earned only one win in Paris in 42 years which came in 2000 when Brian O'Driscoll's famous hat-trick of tries helped secure the victory.

O'Driscoll earned a world-record 140th cap in Saturday's victory over the Italians and will hope to round off his remarkable international career this weekend by helping his country land the championship.