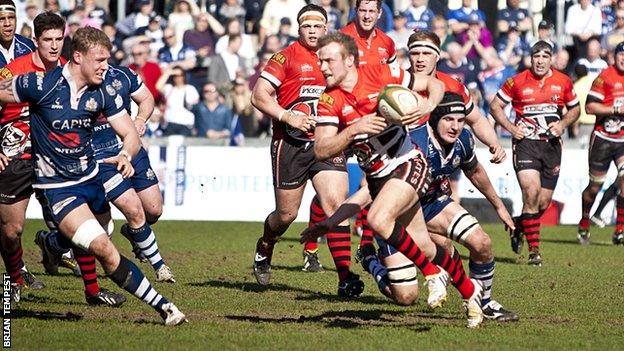 Cornish Pirates boss Ian Davies says his side can be proud of their record against high-flying Bristol this season, despite Sunday's 46-33 defeat.

The Pirates beat Bristol 23-21 and 21-15 earlier in the season and earned a four-try bonus point on Sunday.

"We've taken nine points off a team with a multimillion budget who sign players like they're going out of fashion," he told BBC Radio Cornwall.

"We should take a huge amount of pride from that."

The Pirates faced Andy Robinson's side at Exeter Chiefs' Sandy Park at the start of the season as part of an extra round of fixtures which ensured every club in the Championship faced one opponent three times.

Bristol are top of the table and, with a squad of more than 50 players at their disposal, are most pundits' tips to return to the Premiership.

"It would be difficult to find any of our players who didn't play well," added Davies.

"They stood up to the occasion, they proved a point after everyone seems to write us off - even our own supporters. We need to look at what we've got and we've got some talent out there.

"The character shown was a huge positive but we gave a couple of soft scores away and a couple of things didn't go our way from the officials but that's rugby.

"We just have to hope [next opponents] London Welsh don't watch this video, don't realise how good we are and come down to the Mennaye Field underestimating us - because if that happens they're going to lose.

"I was a little bit worried when we looked like rabbits in the headlights just before half-time but we pulled ourselves together, and took it to them in the second half."