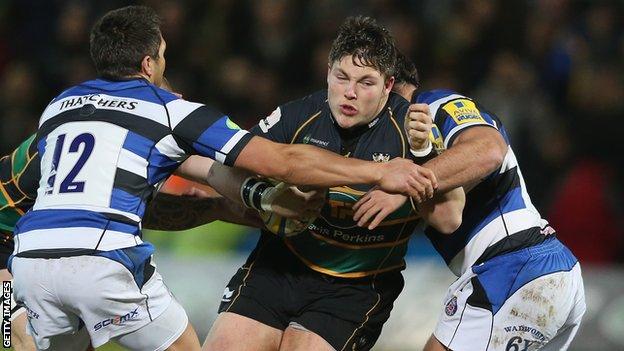 Northampton Saints prop Ethan Waller says there is a growing sense of excitement at the club as they bid to win three trophies this season.

Saints beat Saracens on Sunday to reach the LV= Cup final and are also going well in the Premiership and Amlin Cup.

"There's a real feel around the club that this season is coming to a big climax in all three competitions."

Saints in the Anglo-Welsh Cup

Northampton have now reached the final of the Anglo-Welsh Cup in three of the last five seasons.

Saints beat Gloucester 30-24 at Sixways to lift the trophy in 2010, before going down 26-14 to Leicester Tigers at the same venue two years later.

Jim Mallinder's side, who are two points clear at the top of the Premiership, will face Exeter Chiefs in the LV= Cup final on Sunday ahead of an Amlin Cup quarter-final against Sale Sharks in two weeks' time.

Saints have not won a trophy since their last LV= Cup victory in 2010, when they beat Gloucester 30-24 in the final.

Waller is among a group of youngsters to gain experience in the competition this year, with Tom Stephenson, Tom Collins, Will Hooley, Mike Haywood and Ben Nutley also starting against Sarries.

There were also returns from injury for Ben Foden and James Craig.

"We had a good blend of youth and experience in this team," said Waller, who has made 24 first-team appearances this season.

"There are lads that have played throughout the pool stages and then injured players coming back from injury, the likes of Fodes, Tom Collins and James Craig.

"It was great to put in a performance like that and get to our first senior final of the season."