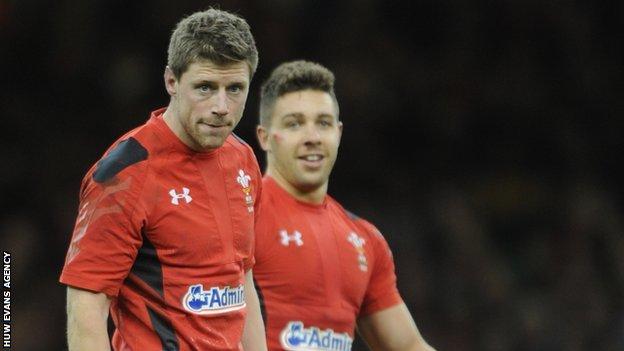 Webb is an injury doubt to face Scotland on Saturday.

Meanwhile Gatland is considering Wales changes for their final 2014 tournament match in Cardiff on Saturday.

Woodward guided England to 2003 World Cup success in Australia, via a quarter-final win over Wales in Brisbane in which the eventual winners trailed 10-3 at the break.

"The biggest call of my whole coaching career was against Wales in the quarter-final of the [2003] World Cup, at half-time," Woodward told BBC Sport's red button Six Nations forum at Twickenham.

"But you look back, you had to make a statement to the dressing room: 'This is going so bad we've got to make some changes'.

"You don't want to wait for 10 more minutes. You make the changes. We took [Dan] Luger off, put [Mike] Catt on [at centre] and [Mike] Tindall on the wing.

"But it was all about making a statement and I thought Wales were so poor in that first half and I thought the half-backs were poor [at Twickenham].

"I thought Webb and Priestland were particularly poor and you've got two very experienced guys on the bench [Mike Phillips and Dan Biggar].

"Get them on and make a statement."

Full-back Leigh Halfpenny dislocated his shoulder and is already ruled out.

"I think there is potentially a chance to look at one or two guys," said New Zealander Gatland.

"There have been players coming off the bench who have done a really good job for us.

"Maybe they deserve the opportunity and a reward for their good displays.

"We have been pretty loyal to the group of players in this campaign and we will reflect on that in the next 48 hours.

"We won't make emotional decisions so quickly after the game, but it's important we look at the game, sit down and then make a prudent judgement about selection for next week."

Scarlets full-back Liam Williams would appear to be in pole position to replace Halfpenny, while Phillips, dropped to the bench for the win over France, could return even if Webb is fit.

Gatland, who has won Six Nations Grand Slams with Wales in 2008, 2012 has already set his sights on being unbeaten at home in this Six Nations campaign.

Wales have already beaten Italy and France in Cardiff so far in this season's tournament.

Scotland will travel to Wales with only one win against Italy in this campaign and in the wake of a narrow defeat by France at Murrayfield.

"We have to win at home and we will end up with a 3-2 record, having won all our home games," said Gatland.

"We will put our hands up and say in this tournament, we have been pretty inconsistent.

"Sometimes we have played exceptionally well and, at times, we haven't been as accurate as we know we are capable of being.

"Next week is a pretty vital game for us. We want to finish the campaign on a positive and look forward to the summer tour to South Africa."