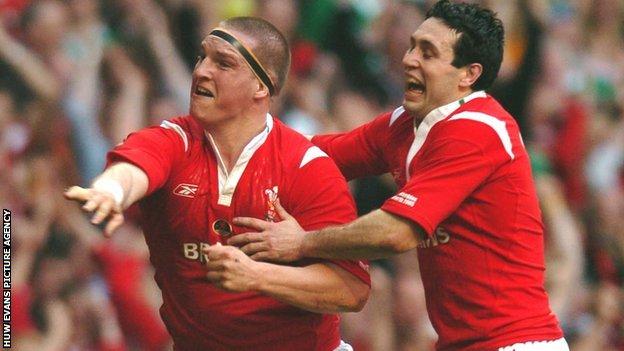 Prop Gethin Jenkins says "everything is on the line" when he equals Wales' appearance record against England in the Six Nations on Sunday.

The 33-year-old will join former fly-half Stephen Jones on 104 caps in the crunch match at Twickenham.

Wales are chasing a third successive Six Nations title, and defeat would end the hopes of either side.

"It's pretty much whoever wins has a chance of getting the championship. If you lose, you are out," said Jenkins.

"For us, having won it the last two years, we really want to make a good fist of retaining the trophy."

When I first came through it was a golden era for England. I was on the end of quite a few hammerings in those days

Since making his Wales debut in a 40-3 win over Romania at Wrexham in November 2002, Jenkins has established himself as one of the world's leading tight-five forwards.

Selection for three British and Irish Lions tours followed, but he played no part in the successful 2013 tour to Australia through injury.

That has left him one Test cap short of Jones' overall record - the former Scarlets and London Wasps fly-half having made six Lions international appearances.

Notwithstanding that comprehensive win, and Wales dominating 2013 Lions selection, the former Pontypridd, Celtic Warriors and Toulon player believes England are a significant threat.

"There is no bigger challenge than playing at Twickenham," Jenkins said.

"I've been lucky enough to get one or two wins there, but it is a fortress for them and a tough place to get a win, especially with the way England have been performing over the last year or two and the way they have progressed.

"They are a young team and a fit team. They seem to have a very good work ethos and they play for each other. We know we have a tough battle on our hands."

Ireland top the table having won three of their four matches so far, their +81 points difference giving them a significant advantage over second-placed France, whom they play on the final weekend.

Wales' 26-3 defeat by Ireland in Dublin contributed 23 of those points and, even if they beat England, they must rely on France beating Ireland in Paris to win the title for a record third season.

"We knew that Ireland wasn't acceptable," Jenkins added. "We were beaten in a lot of different areas.

"We accepted that training wasn't as good as it could have been during that week and the standards weren't where we wanted them to be.

"We just wanted to prove to ourselves and to the coaches what we could do [against France]."

Wales have enjoyed a resurgence during Jenkins' playing career, particularly against England, whom they hope to beat for a record-equalling fourth successive time.

"When I first came through it was a golden era for England. I was on the end of quite a few hammerings in those days," he said.

"So yes, things have changed. They have been rebuilding for the last two or three years and they've brought a few younger players through.

"We went through that phase maybe two years before, but the way they have developed has made them a force in world rugby. Especially looking forward to the [2015] World Cup, they will be right up there."

Jenkins will not dwell on his Wales landmark at Twickenham.

He said: "Stephen has been a great player over the years for Wales and it is a great achievement for me to get to the same level. But it won't mean too much during the game."