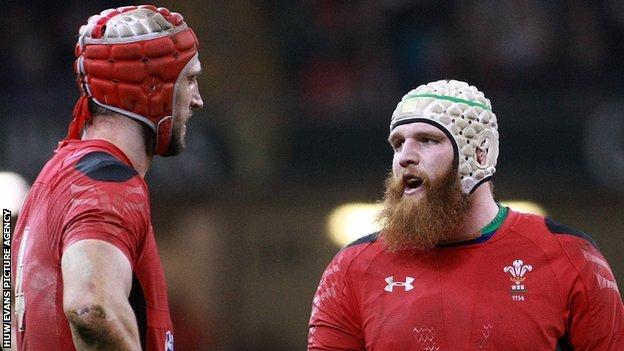 Lock Luke Charteris is out of Wales' Six Nations trip to Twickenham to face England on Sunday.

The 30-year-old Perpignan player has a neck injury and his place is taken by Scarlets' Jake Ball, 22.

Newport Gwent Dragons' Andrew Coombs, 29, comes on to the replacements' bench in the reshuffle.

Ball will make his second Test start having come in to partner Charteris when Alun Wyn Jones dropped out ahead of the 27-6 victory over France.

He comes into a side including Scarlets team-mate Jonathan Davies, who has returned to fitness following a pectoral injury to reclaim a place in the centres.

Northampton's George North has returned to the wing as a result, with Liam Williams back on the bench.

Ospreys captain Jones's return from a foot infection had bumped Ball to a back-up role but, having impressed against France, he has another chance to make his mark.

Wales assistant coach Rob Howley is confident Ascot-born Ball, who made his debut as a replacement in their 26-3 defeat by Ireland on 8 February, can do just that.

I just get stuck in and play my natural game. I like to hit my breakdowns and do the basics well

Howley said: "Luke Charteris picked up a bit of a stinger with his neck on Wednesday in a scrimmaging session and obviously he's come in today a little bit sore.

"It's a great opportunity for Jake. I thought he was outstanding in the nuts and bolts of his game against France.

"He played against two experienced second-rows in [Pascal] Pape and [Yoann] Maestri and came through with flying colours.

"You couldn't ask any more from his first cap and I'm sure he'll just want to replicate that up in Twickenham."

He joined Scarlets in a three-year-deal in 2012, arriving from Australia, where he had switched from cricket to rugby as a teenager.

Ball, who is 6ft 7in and weighs 19st 11lb, was regarded as one of the most promising talents in the Pindan Premier Grade competition in Western Australia.

He trained with Super 15 side Western Force in 2012 before moving to Wales, and has produced some eye-catching performances for Scarlets.

Born in England, he grew up down under and qualifies to play for Wales through his father, who is from Colwyn Bay.

Injury and suspension have helped elevate Ball to the Test arena.

A shoulder injury ruled Cardiff Blues lock Bradley Davies out of the Six Nations and Ospreys' Ian Evans was banned for 12 weeks in January after being sent off against Leinster in the Heineken Cup.

"I am just going to get out there and do what I do best," Ball said.

"I just get stuck in and play my natural game. I like to hit my breakdowns and do the basics well.

"Luke copped the knock quite early in the week, so I was training in that starting role anyway.

"I think even when you are on the bench, you approach it as if you are going to start.

"Against France, it was quite a last-minute thing, which was quite nice to be honest. It didn't give me a lot of time to think about it - I could just get out there and play."