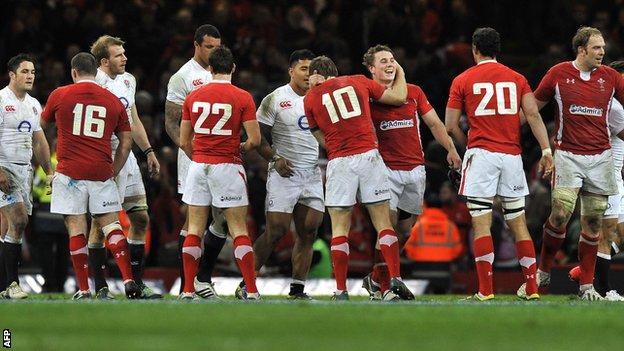 England captain Chris Robshaw insists last year's defeat against Wales will not have any bearing on Sunday's Six Nations match between the teams.

Wales sealed the Six Nations title and destroyed England's Grand Slam bid with a record 30-3 win in Cardiff in 2013.

The sides meet again at Twickenham with both having won two games and lost one.

"Last year doesn't have too big an influence," Robshaw said. "Look at what is up for grabs for us on Sunday - a Triple Crown. That's massive."

With two matches remaining in this year's Six Nations Championship, Ireland and France also have four points following two wins and one defeat, with Ireland topping the table courtesy of a superior points advantage.

England are without a win in their last three internationals against Wales, two Six Nations encounters and a World Cup 2011 warm-up fixture.

The crushing 30-3 reverse 12 months ago was their heaviest in 124 England-Wales matches. Both sides have won 56 times with 12 draws.

"I don't think there's any point in replaying last year's game. What it shows is what not to do," Robshaw said.

"It was disappointing and they are a side that have beaten us and we haven't beaten them.

"People remember what happened and they probably always will because you remember those types of occasion.

"We switched off a little bit, chased the game too early and eventually it played into their hands. By that stage the game was gone and it was a long way back, but we're now a lot better at dealing with those situations."

In their only home match of the campaign thus far, England inflicted Ireland's first defeat of the tournament with a 13-10 win last month and Robshaw said: "Every time we're at Twickenham it doesn't matter who we're playing against we want this to be a hard place to come and play.

"People talk about fortresses and this is what we want it to be. It's not something that easily happens and it's a lot of hard work and dedication and it takes a lot of time but we have the opportunity now.

"It will be a slow building process but we need to make sure that every time we're out here our performance lifts by 20%."

Analysing Sunday's opponents he said: "You look at the experience they've got there, a huge amount of influential players have gone on that tour and know what it's about.

"You look at how many times these guys have actually played together, they understand each other and that is something experience brings you."

But asked who the favourites are for Sunday's showdown Robshaw added: "I'd say England. We're back here at home. Both sides are very evenly matched and very exciting but you've got to back yourself."