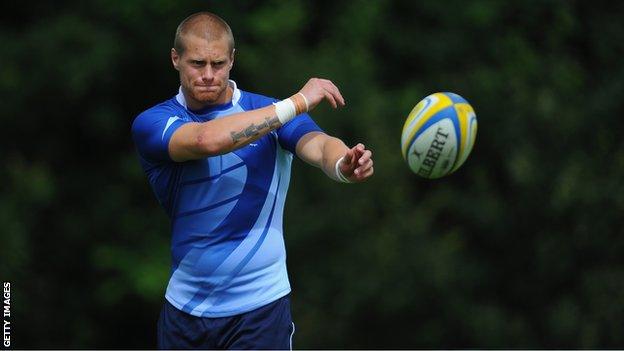 Edinburgh have signed Newcastle Falcons three-quarter Michael Tait until the summer of 2015, five months after a short loan spell with the Pro12 club.

The 23-year-old former Scotland Under-20 international has not featured in the Premiership this season and has been peripheral since missing 18 months with a knee injury sustained in 2010.

"I wanted to stay here in September but got recalled," said Tait, son of former cross-code international Alan.

Tait, the son of former Scotland international Alan, who also played for his country at Rugby League, vowed to make the most of his second chance in Edinburgh.

"I couldn't believe it when I heard from Edinburgh," he said. "This is a massive opportunity.

"I'm going to grab it with both hands and give it everything I've got."

Edinburgh head coach Alan Solomons says Tait has been given a chance to prove his worth.

"Michael is a young player who we saw briefly earlier this season and who probably didn't have enough time down at the club," he said.

"What we did realise straight away is that he's a really good team man that fits into the Edinburgh Rugby environment very well.

"He's a bright young talent who comes out of the Borders region and this year-long contract will give him an opportunity to show what he can bring."