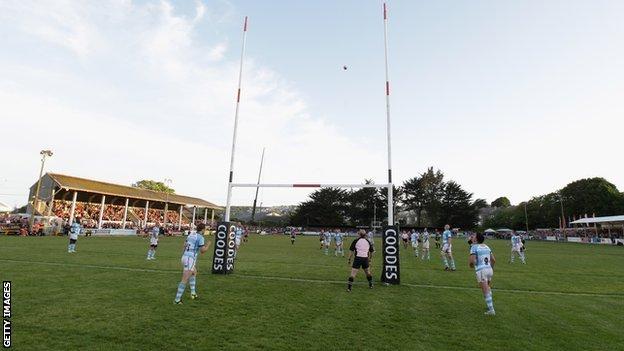 Cornish Pirates leading Championship try-scorer this season Tom Kessell is one of five players to sign new deals with the Mennaye Field club.

Scrum-half Kessell, 24, has touched down eight times in the league, and 12 in total this term.

Kessell has signed a two-year deal, like back-rower Alex Cheeseman, 25, prop Jack Andrew, 23, and locks Darren Barry, 24, and Will Graulich, 21.

"It is great to keep hold of these players," Pirates boss Ian Davies said.

"Especially Darren and Tom who have attracted Premiership interest this season.

"Since Alex converted back to open side flanker he has been a consistent performer and I'm sure is on the radar of many clubs."

Former England Under-19 international Barry, who joined the Pirates from Bristol in 2012, has made 53 appearances for the club.

Former Exeter and Plymouth player Andrew arrived at the Mennaye last year after his other brother Paul had agreed to join Premiership side Worcester.

While Graulich has made 18 appearances since switching from Gloucester and ex-London Wasps player Cheeseman has featured 44 times for the Penzance side.

The Pirates now have 14 players committed to the club beyond this season, with full-back Craig Holland among nine to sign last moth.