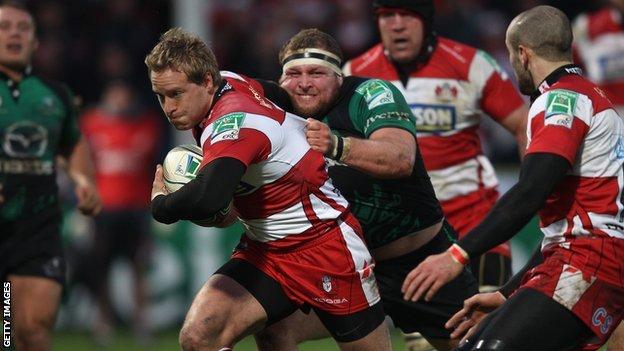 Gloucester fly-half Tim Taylor has been forced to retire because of a serious knee injury.

The 31-year-old has spent over a year on the sidelines after picking up the injury in an 'A' league game for the Cherry and Whites.

Former Nottingham player Taylor has been at Kingsholm since 2010 and has made 41 appearances.

"The knee hasn't been right since I've had a couple of operations," he told BBC Radio Gloucestershire.

"After my first op, it was going to be a nine-month recovery period and about eight months into that I realised I had to have another operation.

"It got in my head then that it could be a career-ender. You never want to think that, but you have to consider what's best for your future."

Since his injury, he has been helping coach Freddie and Billy Burns, Rob Cook and Billy Twelvetrees to develop their kicking skills.

"I've been so fortunate to be kept involved in the club," added Taylor.

"It's helped a lot. I think it would have been a lot harder if I was suddenly out of the game. I've really enjoyed it and I hope it carries on."