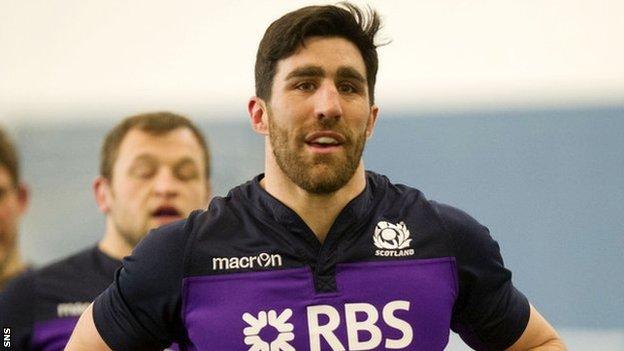 Kelly Brown has been recalled to the Scotland side to face France, with the Saracens forward also regaining the captaincy from Greig Laidlaw.

The 31-year-old had been dropped by head coach Scott Johnson after the opening Six Nations defeat by Ireland.

"I think Saturday is a game that will really suit Kelly," said Johnson.

"Unlike other sides in the competition, France play above the ground a bit and there will be a lot of mauling. I've picked a side that can win the game."

Geoff Cross starts at tight-head and Dave Denton comes into the back row. Ryan Wilson, who has had tonsillitis, drops to the bench while Chris Fusaro and Moray Low are excluded from the squad following the win over Italy.

Johnny Beattie moves across the back row to make way for Denton.

Unlike other sides in the competition, France play above the ground a bit and there will be a lot of mauling. I think the pitch suits Kelly too.

"The back-row change is slightly enforced as Ryan Wilson has not been well at the start of this week with a tonsillitis bug and it was important we were not hampered in our training, so Dents comes straight in," said Johnson.

"Geoff did really well when he came on against Italy and it's right that he should start this week."

"Kelly's a great player and it's obviously down to the coaching staff if they think he's right for this game," he told BBC Scotland.

"But it's the same for everybody. The good thing about where we are now is that we're now getting a big enough squad to have competition for places.

"Whether you're captain or not, if you're not performing at 100% then you'll be moved about."

While the captaincy has been handed back to Brown, Laidlaw retains his place at scrum-half ahead of Chris Cusiter.

Johnson played down the change in skipper, reiterating his previous assertions that he wants to increase the overall leadership group within the squad.

"Great sides around the world have a multitude of leaders in their team," he said.

Euan Murray, the 58-time capped prop who returns to the squad following a finger injury that has ruled him out of the Six Nations so far, has to make do with a place on the bench.

France have suffered a series of injuries ahead of their visit to Murrayfield, but Johnson warned the list of absentees would not make the visitors any less dangerous.

"Whatever side France put out will be a good one," the Australian added. "They have proven over the years that they are a great rugby nation, so whatever side comes to Edinburgh we know we'll have to be at our best."