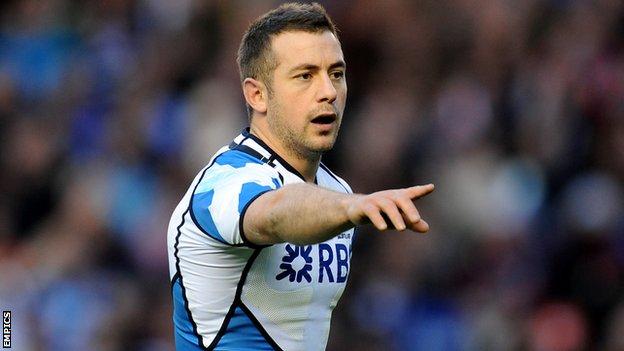 Gloucester have agreed a deal to sign Scotland scrum-half Greig Laidlaw from Edinburgh for next season.

The 28-year-old can also operate at fly-half and will help fill the gap left by Freddie Burns, who will leave Kingsholm in the summer.

"We see him very much as a nine/10. It's a role he's done with Scotland," director of rugby Nigel Davies told BBC Radio Gloucestershire.

"He's exactly the right type of character we need to bring in."

Davies added: "We've spoken to Greig and he's really keen to get down to Gloucester. He felt it was the right move for him because of the environment.

"He wants to be successful and he feels, with the squad we have for next season, that he can do that."

Laidlaw said that, although he was "naturally I'm excited about the next chapter of my career", his focus was on helping Edinburgh and Scotland.

He added that he has had "seven fantastic seasons at Murrayfield".

I understand he feels that, at this time in his career, something new and fresh will be good for him

Laidlaw, who has 27 international caps, grew up in the Scottish Borders and signed for Edinburgh in 2006 as understudy to Mike Blair.

He became club captain at the start of the current campaign and has made 136 appearances for the Pro12 outfit.

"I've taken great pride from playing and captaining the team in some memorable matches, something which I'll never forget," he said.

Laidlaw follows the path of previous Scottish scrum-halves, including Bryan Redpath and Rory Lawson, to the Premiership club.

Edinburgh coach Alan Solomons insists he is anticipating heightened competition in the position despite Laidlaw's departure.

Grayson Hart, who scored twice in the club's win over Ospreys on Friday, and Sean Kennedy, who has been on loan to London Irish, are both Scotland A caps, while the younger Sam Hidalgo-Clyne is expected to challenge for a starting place.

"Greig has made a great contribution this season, both as a captain and as a player, but I also understand he feels that, at this time in his career, something new and fresh will be good for him," added Solomons.

"Greig has been fantastic for us, but this move clearly opens the door for the three quality young Scottish scrum-halves that we have at the club. He goes absolutely with our blessing."