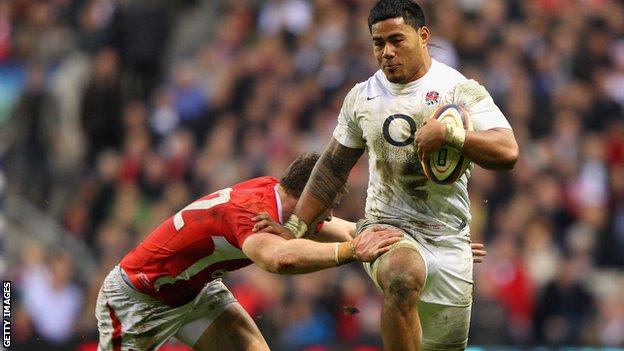 Tuilagi, 22, and Yarde, 21, have been included after injury problems.

Samoan-born Tuilagi played 70 minutes in the Tigers' 41-18 win against Newcastle on Sunday after five months out with a chest muscle injury.

England in the 2014 Six Nations

On Saturday, Yarde completed his first full game for London Irish since sustaining a hip problem in November.

"If Stuart asks me if I'm ready to play I'll say 'absolutely'," said Tuilagi, who has played 21 times for England. "I'll be going down to training with England and we'll take it from there.

"The boys are doing really well and it'll be good for me to go down there and get settled back in."

The pair will now train with the rest of the 34-man squad, although it would be a surprise if either made the match-day 23, which will be announced by England coach Stuart Lancaster on Friday.

England and Wales are involved in a four-way tie, along with France and Ireland, at the top of the Six Nations standings, heading into the match at Twickenham.

Despite their opening-round defeat by France, Lancaster still believes his side can clinch the title.

If we can get the win on Sunday, the title still within our capability

"In order to win a championship, you have got to win four straight after losing the first. No-one has won a title on three wins.

"If we can get the win on Sunday, it's still within our capability."

Meanwhile, England's sevens team will take on Wales in a one-off international at Twickenham immediately after Sunday's Six Nations contest.

The teams have met twice this season, England winning 33-12 during the Sevens World Series in Dubai in December and 21-7 in Wellington last month.

The match will be broadcast live during the BBC's Six Nations Forum on the Red Button and online from 1700-1800 on Sunday, 9 March.