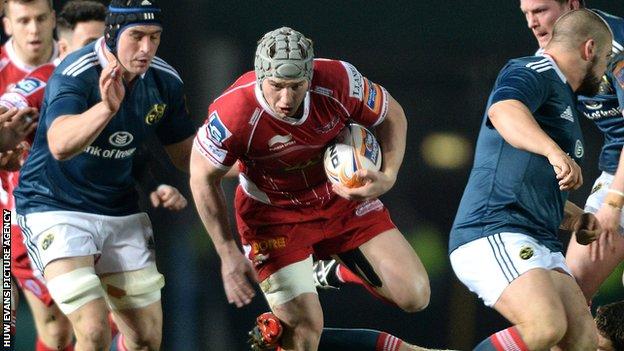 The 2013 British and Irish Lions centre came through 64 minutes of the Scarlets 18-13 win over Munster on Saturday.

Davies, 25, back after recovering from a pectoral injury suffered in the defeat by South Africa last November, could return for the Six Nations clash.

"He showed in his first carry of the game that he hasn't lost any of that line-breaking ability.

"I am sure he will give the Welsh camp a boost when he goes back in on Monday."

Davies has missed the opening three games of the Six Nations campaign, against Italy, Ireland and France.

Scott Williams, who is now himself ruled out with a shoulder injury for the rest of the season, played in the win over Italy and started the defeat by Ireland.

Wing George North moved to centre to partner Jamie Roberts in midfield as Wales lost in Dublin, and he started their 27-6 win over France in Cardiff.

But Davies was released by Wales coach Warren Gatland to play for the Scarlets in a bid to prove his fitness ahead of the trip to London on Saturday.

If selected, he will be reunited with his Wales and Lions centre partner Roberts.

Jones says Davies, who partnered former England international Olly Barkley in the Scarlets midfield, had a major influence in the build-up to the win over Pro12 leaders Munster.

"Jon was very good and had a good week with the group, in terms of a leadership role," said Jones, who retired injured in 2010 after winning the last of his 47 Wales caps in 2009.

"He was very vocal and instrumental in us preparing well and I think it has been one of our best training weeks.

"I think his performance was pretty good, considering the length of time he has been out and the lack of rugby he has had.

Meanwhile, the Welsh players currently based in France appear to have come through their Top 14 games with their clubs unscathed.

Utility back James Hook kicked Perpignan's points in their 37-9 defeat at Toulouse, but lock Luke Charteris did not feature.

Prop Paul James played 60 minutes for Bath in the 23-10 defeat to Saracens in the Aviva Premiership clash on Friday.

Wales were hoping their only other injury concern, lock Alun Wyn Jones, who missed training last week after he was ruled out of the win over France with a foot infection, would resume training.