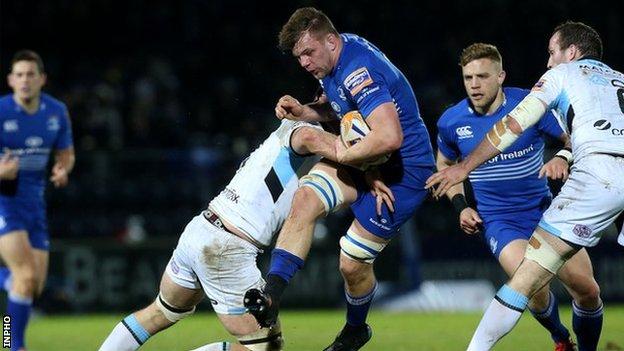 Defending Pro12 champions Leinster went top of the table with a hard-fought win over Glasgow Warriors at the RDS.

Noel Reid, Darragh Fanning and Rhys Ruddock all went over for the hosts who leapfrog Irish rivals Munster after the latter's defeat by the Scarlets.

Glasgow touched down for three tries, Richie Vernon bagging two of them and Nikola Matawalu scoring the third, so they remain fifth in the standings.

Ian Madigan contributed 13 points with the boot to help his side to victory.

The game was only six minutes old when Reid went over for the game's first try, the youngster cleverly evading two tackles after a fine backs move from a scrum had released the centre.

Madigan bagged the extras from right in front of the posts and it appeared that Gregor Townsend's men were going to be in for a long night at the RDS.

But the Scottish side's response was almost immediate and after some sustained pressure it was Scotland fly-half Ruaridh Jackson who opened up the champions.

The number 10 skipped his way through the backline and his clever pass found the streaking Vernon on his shoulder, who crashed over for the try.

Vernon's midfield partner Finn Russell was in charge of the kicking duties and his simple conversion levelled things up.

Leinster appeared to have weathered that storm soon after when the forwards won Madigan a penalty that he duly converted to re-establish a lead at 10-7.

The Warriors clearly were not daunted though and they had the next try in the 23rd minute, and it was that man Vernon again.

The former flanker found space down the right after the pack had laid the platform and when he barrelled over the Warriors were in front at 12-7, Russell off target with the conversion this time.

No sooner had they gone in front however than ill-discipline let the Warriors down and Madigan slotted a penalty to immediately re-establish Leinster's lead at 13-12.

On the half hour mark Madigan was at it again, slotting another penalty to extend the hosts' lead to four points.

As half-time approached it was all Leinster and finally the pressure told as Fanning went over, collecting Zane Kirchner's superb shovel pass to ground in the right corner.

Madigan missed with his conversion however and there was still time before the interval for Russell to slot a penalty at the other end and keep the Warriors in the contest at 21-15.

After half-time it was the visitors who started the brighter and came agonisingly close to their third try when a concerted pack effort carried them to the verge of the try line.

It appeared that the chance had passed however when referee Nigel Owens went to the TMO but a last angle clearly showed Matawalu sliding his way over the line through a sea of bodies and the try was awarded.

Russell's conversion had the Warriors back in front but that only served to fire up the Leinster pack who re-asserted their dominance as the half wore on.

After extended pressure in the Warriors 22, and manful defence from the Scottish side, it was Ruddock who eventually swivelled over from close range to put Leinster back in front, Madigan's successful conversion making it 28-22.

Still though the Warriors refused to buckle and as the game entered the final 10 minutes it was they that remained in the ascendancy.

But Leinster's defence was solid, only allowing Russell a penalty that reduced it to a three-point lead in the closing stages, but that was not enough as the men in blue hung on.