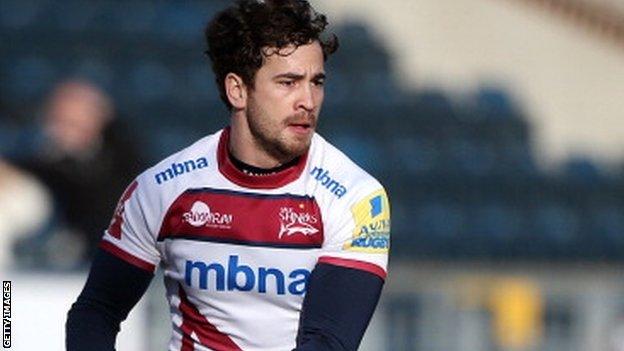 Sale Sharks fought back to win against Wasps at Adams Park and continue their push for the Premiership play-offs.

The visitors led at the break thanks to a try from Dan Braid and two penalties and a conversion from Danny Cipriani.

Wasps fly-half Joe Carlisle added to his three first-half penalties with a fourth, before Joe Simpson crossed to give the hosts a seven-point lead.

Wasps slipped to their fourth consecutive Premiership defeat against an in-form Sale side who must now be eyeing up a top-four finish.

Sale have beaten Wasps by four points in both Premiership games this season.

On both occasions, Danny Cipriani has come off the bench in place of Nick MacLeod, to kick the winning points and haunt his former employers.

The visitors have suffered just one league defeat this year and have climbed to within two points of fourth-placed Harlequins.

The game came to life when Simpson challenged for his kick ahead, taking out Nick MacLeod in the air.

The Wasps scrum-half received a yellow card, but MacLeod was unable to continue and was replaced by Cipriani, whose first job to slot the resultant penalty.

They extended their lead when Mark Cueto chipped ahead and skipper Braid was on hand to collect the loose ball and run in, Cipriani adding the extras.

The return of Simpson from his sin-binning sparked Wasps into action, fly-half Carlisle adding three penalties in quick succession to cut the lead to one point at the break.

The second half continued in the same vein, Carlisle slotting a fourth penalty, before a loose kick from Cipriani went through a couple of pairs of hands before reaching Simpson, who raced in from halfway.

In a topsy-turvy match, it was now Sale's turn to launch a fightback and Cipriani was involved again, selling a neat dummy before sending Samoa international Leota on a run to the corner.

Cipriani missed the conversion, but put the visitors back into the lead on the hour with a penalty, before kicking a third late on to ensure the win.

Sharks remain in the sixth position in the table, but crucially they have extended their lead over Wasps in seventh, leaving them with a eight-point advantage over their nearest rivals.

"I'm delighted with the result, this time last season we were looking at being in the Championship.

"We had a good start before we had a rocky patch, conceding 17 points.

"But we then became dominant in the scrums to win the match."

"Sale deserved to win. They were a lot smarter than us. They were far superior at the kicking game.

"We gave away an easy 10 points at the start, which seems to be our Achilles heel.

"We are missing our X-factor players in Christian Wade, Tom Varndell and Elliot Daly."