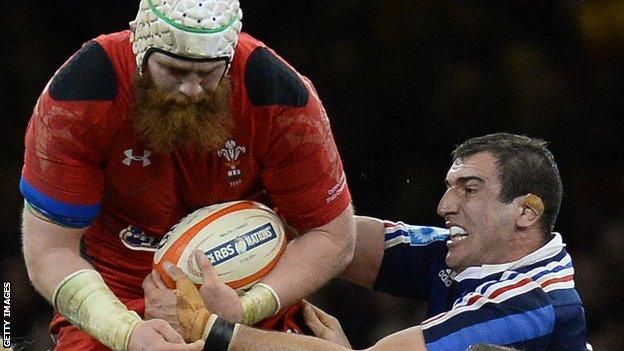 Ball made his first start for Wales in the 27-6 win against France.

"Jake took the opportunity with both hands," said Easterby, "So he leaves the Welsh selectors with a bit of a headache, which is great."

English-born but Australian-raised, Ball, qualifies for Wales thanks to his father, who is from Colwyn Bay.

He joined the Scarlets in August 2012 having trained with Super 15 club Western Force.

The 22-year-old was initially asked to train with the Six Nations squad in the run up to the tournament.

Following a series of injuries and suspensions picked up by players in his position like Ryan Jones and Ian Evans, Ball received a full call up.

He made his debut as a replacement in the defeat to Ireland before his start against France.

"He's really set some standard with us this year both on the pitch and in the gym and his work rate and work ethic is excellent."

Despite doing well against the French, the 6ft 6in, 19 stone forward could lose his place.

British and Irish Lion Jones, who has won 78 Wales caps, is expected to be available for the crunch clash at Twickenham.

Whoever wins the match will have a shot at winning the Six Nations.

Easterby believes that even if his player doesn't get the nod, he has a bright future in the game.

"He's 22 and he's got a long career ahead of him. I think he'll [Ball] only go from strength to strength."