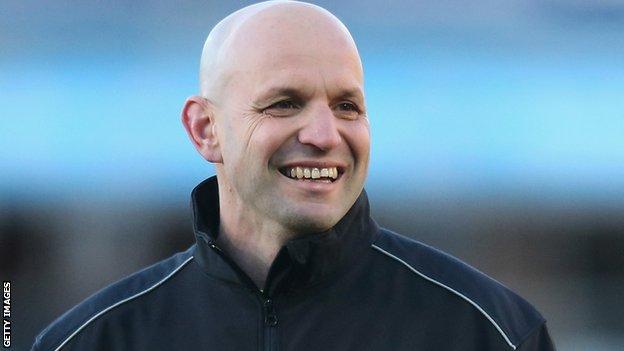 Northampton boss Jim Mallinder has told his Premiership leaders to keep last year's 16-point defeat by Gloucester fresh in their minds this weekend.

The sides meet on Saturday, 13 months after Saints were upset 27-11 at home by the Cherry and Whites.

Mallinder told BBC Radio Northampton: "We don't forget those games. We're going through a good patch now and have been through rocky patches in the past.

"But we've got a good team now, the lads are playing well."

That loss at Franklin's Gardens in February of last year was a low point in Northampton's season.

But Saints recovered to beat Gloucester into the fourth and final play-off spot and went all the way to the Twickenham final, which they lost to Leicester.

Northampton's progress has been impressive this season, retaining their spot at the top of the table with victory at Newcastle last weekend and in turn recording an 11th consecutive win in all competitions.

Their only Premiership defeat this term has come at the hands of this weekend's opponents.

"We need to be careful during the week," said director of rugby Mallinder.

"There will be some tired bodies. I know [Newcastle] has taken quite a lot out of them.

"It's against Gloucester and they have got some talent in that team and they've not had the best of seasons, but we know they are capable of turning teams over."